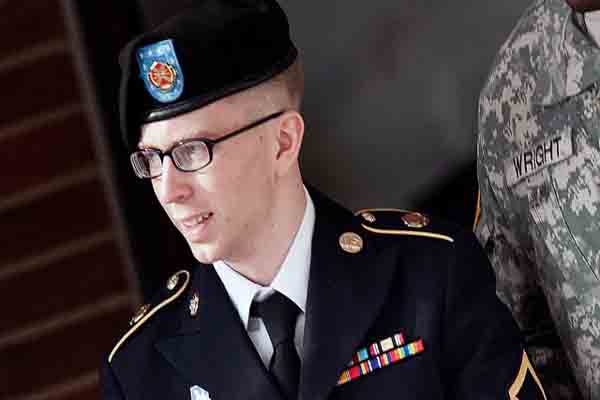 Army Private First Class Manning, 25, is accused of the biggest leak of classified information in United States history. The U.S. government has pushed for the maximum penalty for what it views as a serious breach of national security. But anti-secrecy activists have praised him for shining a light on shadowy U.S. operations abroad. This month, Judge Colonel Denise Lind denied a request by Manning's attorneys to throw out the most serious of the 21 charges against him, aiding the enemy. She said that Manning's training as a low-level intelligence analyst would have taught him that publicly releasing secret information would pose a risk to U.S. national security.

Observers expect Manning, who in March pleaded guilty to lesser charges, will be convicted of at least some of the 21 counts.

"He's just a dumb kid who got himself into a situation where he felt he was saving the world," said Joseph Wippl, a professor of international relations at Boston University and a former CIA officer. "I think he should be convicted and they should be easy on him. They need to do more on limiting access to classified information."

Army prosecutors contend U.S. security was damaged when the WikiLeaks anti-secrecy website published combat videos of an attack by an American Apache helicopter gunship, diplomatic cables and secret details on prisoners held at Guantanamo Bay that Manning provided the site while he was a junior intelligence analyst in Iraq in 2009 and 2010.

Lind said on Monday that she plans to issue her verdict in the case at 1 p.m. EDT on Tuesday in Fort Meade, Maryland.

Manning, originally from Crescent, Oklahoma, opted to have his case heard by Lind, rather than a panel of military jurors.

Military prosecutors have called the 25-year-old defendant a "traitor" for publicly posting information that the U.S. government said could jeopardize national security and intelligence operations.

Defense lawyers said Manning was well-intentioned but naive, hoping that his disclosures would provoke a more intense debate in the United States about diplomatic and military actions in Iraq and Afghanistan.

More than three years after Manning's arrest in May 2010, the U.S. intelligence community is reeling again from leaked secrets. The latest revelations came from former intelligence contractor Edward Snowden, who has been holed up in the transit area of a Moscow airport for more than a month despite U.S. calls for Russian authorities to turn him over.

WikiLeaks founder Julian Assange has surfaced again as a major player in the newest scandal, this time aiding Snowden in eluding authorities to seek asylum abroad.

The cases of Manning and Snowden illustrate the difficulties of keeping government secrets at a time the Internet makes it easy to disseminate them widely and quickly. In addition, more people are granted access to classified data.