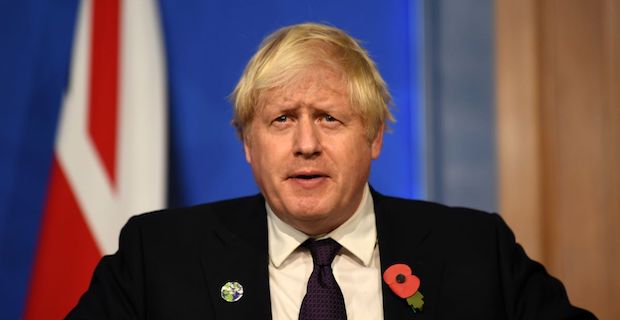 British Prime Minister Boris Johnson in a news conference on Sunday, defending the COP26 agreement, insisted that it “sounds the death knell for coal power” despite a backlash after language regarding coal was diluted. While hailing the “game-changing agreement,” Johnson did admit that his “delight” was “tinged with disappointment” due to the final language agreed upon with regard to coal.  India and China called for the original “phase out” of coal to be replaced with “phase down” in the final stretch of negotiations.  Johnson said: “Those for whom climate change is already a matter of life and death, who can only stand by as their islands are submerged, their farmland turned to desert, their homes battered by storms, they demanded a high level of ambition from this summit.” On the issue of phasing out coal, he said: “While many of us were willing to go there, that wasn’t true of everybody. Sadly that’s the nature of diplomacy.”  Johnson added: “We can lobby, we can cajole, we can encourage, but we cannot force sovereign nations to do what they do not wish to do. It’s ultimately their decision to make and they must stand by it. “But for all that, we can be immensely proud of what has been achieved by Alok Sharma and his team.”  Johnson spoke alongside Alok Sharma, a government minister and president of COP26.  Sharma said the Glasgow summit had “kept 1.5C within reach” but that India and China would have to “explain themselves to developing countries.” He added: “If we had not managed to get this deal done, we would have ensured those developing countries that need support, on the frontline of climate change, would not have got support.” Earlier in the day, Ed Miliband, the shadow business and energy secretary, said the 1.5 C target was in “intensive care.” Miliband said: "The task of the world is to halve global emissions over the coming decade, that's by 2030, that's what the scientists tell us is necessary to keep 1.5 degrees alive and the truth about Glasgow, despite some progress, is that the world is only probably about 20% or 25% of the way to that goal."

Keywords:
British Prime MinisterBoris JohnsonCOP26 Agreement
Your comment has been forwarded to the administrator for approval.×
Warning! Will constitute a criminal offense, illegal, threatening, offensive, insulting and swearing, derogatory, defamatory, vulgar, pornographic, indecent, personality rights, damaging or similar nature in the nature of all kinds of financial content, legal, criminal and administrative responsibility for the content of the sender member / members are belong.
Related News