At least 181 killed in Egypt on Friday 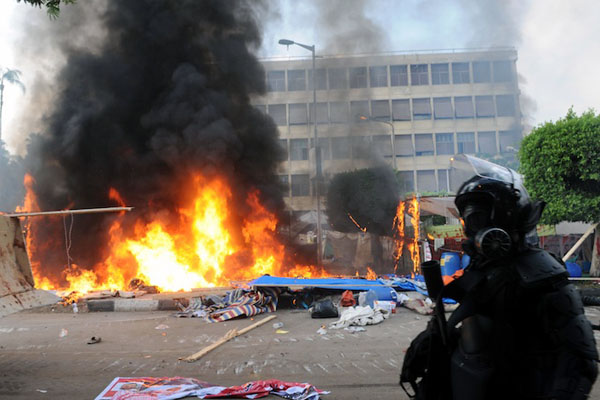 Violence erupted when unidentified gunmen attacked anti-coup marches in Ramses district just outside a local police station. The National Alliance for the Defense of Legitimacy, a coalition of largely Islamist parties and figures supportive of ousted President Mohamed Morsi, said at least 213 people were killed in attacks on a number of rallies staged by anti-coup demonstrators in several Egyptian cities on Friday. "The coup leaders used military helicopters to fire live ammunition at peaceful protesters in Cairo's Ramses Square and in Giza," it charged. "Army tanks fired at protesters in Alexandria, making army chief Gen Abdel Fatah al-Sisi and his lieutenants the first to use Egyptian army forces and its heavy weaponry against the Egyptian people," said the statement. "This is a crime against humanity and those who perpetrated it would not escape justice."

One protester was killed in Sphinx Square in western Cairo, according to medical sources.

A march of pro-Morsi protesters in Giza came under fire, reportedly leaving one dead.

Three people were killed during an attempt to storm a police station in 6 October City, 38 km off Cairo.

Nine people lost their lives and 143 were injured in clashes near the local security directorate in Fayoum province, some 100 km south of Cairo.

Twenty-one people were killed and 100 others injured in clashes between protesters and unidentified individuals in the coastal city of Alexandria.

Seven people were killed and 52 injured in the Nile Delta city of Damietta in an attack by gunmen on a funeral for an anti-coup demonstrator killed earlier.

Seven others were killed when a pro-Morsi rally came under fire in the canal city of Ismailia.

Another person was killed and three were injured when masked gunmen tried to storm a police station in the Ismailia town of Tel al-Kabir.

Eleven people were also killed and 50 injured in clashes between anti-coup demonstrators and security forces in the canal city of Suez.

Five people were killed and 66 injured, including eight police officers, when a group of bearded men attempted to storm a hospital in the canal city of Port Said.

Two members of a vigilante committee were killed while standing guard outside a church in the Upper Egyptian province of Sohag. One person was also killed in an attack on a local police station.

Another person was killed and 50 injured in clashes in the Nile Delta city of Tanta.

Two people were killed in an attack on a pro-Morsi rally in the northern Sinai Peninsula.

Four were killed in similar circumstances in the Upper Egyptian province of Minya.

Two others were killed in an attempt to loot a local museum in the city.

In the Nile Delta of Mansoura, one was killed and 53 were injured in clashes between Morsi's supporters and opponents, medical sources said.

The Health Ministry, however, has put the Friday's violence tally at only 17.