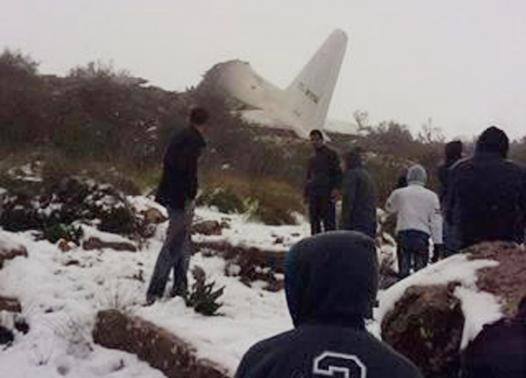 State television showed footage of the wreckage of the plane near the village of Ouled Gacem in eastern Algeria, smoke rising from the site and emergency crews scouring the forested area for survivors and bodies. "I saw the military plane crashing, and it was cut into two pieces," Mohamed, a fireman told Reuters at Ouled Gacem, near the crash site in Oum El Bouaghi province, 500 km (300 miles) east of Algiers. Colonel Lahmadi Bouguern told the APS state news agency that 99 passengers and four crew were on board the C-130 Hercules transport plane, which took off from the southern Tamanrasset province and was bound for Constantine. The Defence Ministry said 77 people were killed and said the crash was likely due to bad weather. Initial reports in Algerian media had put the death toll at 103. "The plane crashed into a mountain and exploded. Several bodies were burnt to ashes and could not be identified," one official told Reuters by telephone from the area. State television said President Abdelaziz Bouteflika had declared three days of mourning from Wednesday. The crash was the worst in Algeria since 2003 when an Air Algerie jet crashed shortly after takeoff from Tamanrasset, killing 102 people. The Defence Ministry said it had set up a commission to investigate the crash and that army Chief of Staff and Deputy Defence Minister Ahmed Gaid Salah would go to the crash site.