6 killed in US strikes on airbase says Syrian army 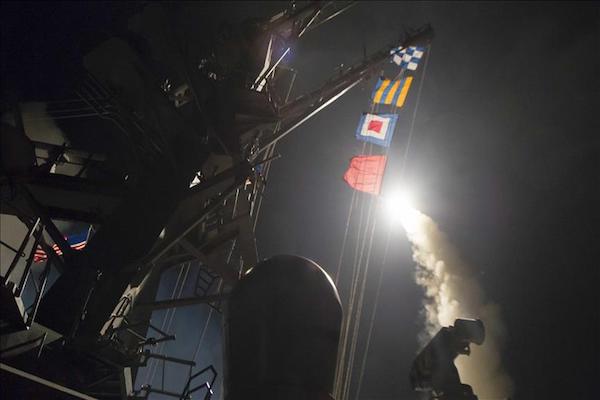 The statement, broadcast on Syrian state TV, described the U.S. strike as “aggression that violates all international laws and norms and seeks to negatively influence the capabilities of the Syrian Arab Army in the fight against terrorism." It added, "The Syrian Army Command condemns the continuation of the wrong U.S. strategy that undermines the counter-terrorism operation currently carried out by the Syrian Arab Army.” Earlier Syria’s state-run SANA news agency reported, citing Syrian military sources, “One of our airbases in central Syria has been attacked by America before sunrise. The attack caused deaths”.

The U.S. fired 59 Tomahawk missiles at a Syrian military airbase American officials believe was used to carry out a deadly chemical attack Tuesday, the Pentagon confirmed. The chemical attack killed more than 100 civilians and injured around 500 others in Khan Shaykhun town of the northwestern province of Idlib, and led to widespread international outrage. The U.S. missiles were fired from two U.S. destroyers in the eastern Mediterranean and hit the airbase at approximately 3:45 a.m. Syrian local time Friday (0045GMT). Aircraft, hardened aircraft shelters, petroleum and logistical storage, ammunition supply bunkers, air defense systems, and radars were targeted, the Pentagon said.