Turkey’s 2014 World Cup dreams are still alive after passing a do-or-die test against Romania with a 2-0 win in Bucharest on Sept. 10 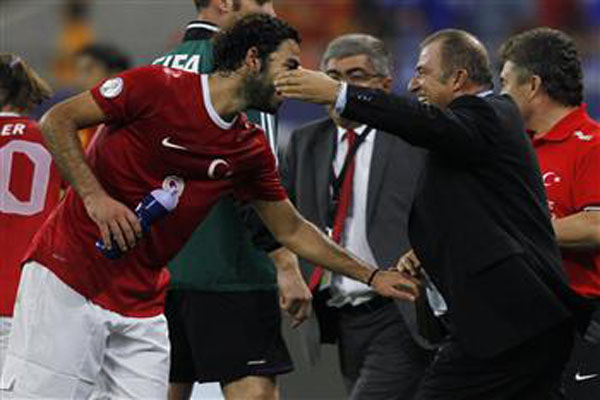 Burak Yılmaz and Mevlüt Erdinç were on the score sheet as Turkey scored a memorable win to reignite its faint hopes of qualifying for football’s greatest showcase in Brazil next year.  With the result, Turkey went level with Romania in third place in Group D, with both teams on 13 points. Hungary, which demolished Estonia 5-1 following a 3-0 loss against Romania over the weekend, stands second with 14. The Netherlands, leader of the group, defeated minnows Andorra 2-0, becoming one of the first two European nations to qualify for the 2014 World Cup. Italy also booked its ticket to Brazil after a comeback 2-1 victory over the Czech Republic. “Turkish people want to see their team go there and win games. Let’s win all our games and see if we can qualify,” Terim said after the game. “Sometimes you qualify for the competitions and sometimes you cannot, but everybody wants to have a national team to be proud of. We need to have that.”

Burak Yılmaz opened the scoring in the 22nd minute, burying a difficult header between two defenders past Romanian keeper Ciprian Taturasanu, after a cross from Fenerbahçe midfielder Caner Erkin.

Turkey doubled its lead in the dying minutes of the game through substitute Mevlüt Erdinç. Mevlüt, who recently joined French Ligue 1 outfit Saint Etienne, beat Taturasanu with a cool strike into the bottom corner of the net during stoppage time.

The game was Terim’s second game in his third spell as Turkey coach after replacing Abdullah Avcı, who resigned last month. Terim led Turkey to a 5-0 win over Andorra last week in his first game.