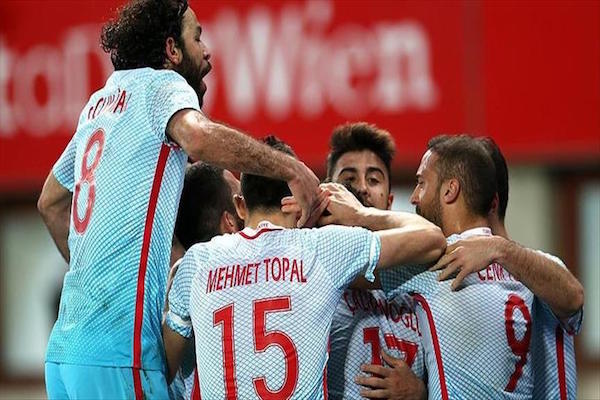 ISTANBUL (AVRUPA TIMES)-Turkey beat Austria 1-2 at a friendly football match in Vienna Tuesday night as both teams prepare for the Euro 2016 finals in France. Austrian midfielder Zlatko Junuzovic from Werder Bremen football club scored the first goal of the match in the 22nd minute at Ernst-Happel Stadium. Turkey turned the tables around with an equalizer in the 43rd minute, which was scored by free-kick specialist Hakan Calhanoglu of the German football team, Bayer Leverkusen.

The third and winning goal came shortly thereafter in the 56th minute, and was scored by attacking midfielder Arda Turan, of the Futbol Club Barcelona.

In FIFA rankings, Turkey is at 20th spot, while Austria is 10th.

Turkey and Austria will compete in Europe's top-tier international football tournament, the Euro 2016, which will be held in France from June 10 to July 10.

Turkey will play against Croatia, the Czech Republic and Spain in Group D, while Austria will compete against Hungary, Iceland and the Portugal in Group F.

Turkey recently beat Sweden 2-1 in a friendly match on March 24, in Turkey.