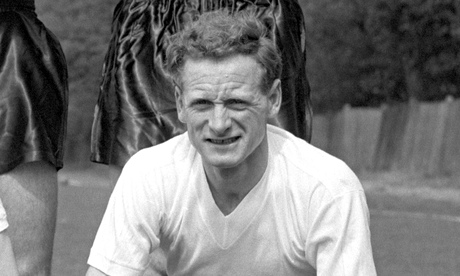 The forward played for the Lancashire club 433 times between 1946 and 1960, scoring 187 goals. He also made 76 appearances for England, scoring 30 times, which leaves him at joint sixth in the all-time goalscoring charts. Despite his reputation as one of the greatest players of his age, domestic success eluded him. He finished as a league runner-up in the Football League Division One in 1953 and again five years later. He was also on the losing side in the FA Cup final in 1954. Finney was the subject of one of the most famous football pictures in history, called "The Splash", which showed him beating two defenders in sodden conditions at Chelsea's Stamford Bridge ground in 1956. The image was also made into a statue, which stands outside Deepdale in Preston, the ground with which he became so closely identified. Preston North End's Tom Finney splashes through a puddle on 25 August 1956. Photograph: John Horton/PA

Former Leicester, Tottenham Hotspur and England striker Gary Lineker paid tribute on Twitter: "Sir Tom Finney has left us. One of the greatest players this country has ever seen, and a true gentleman."

"The thoughts of everyone at the Club, and those connected with it, are with his family at this time."

After his playing career finished, Finney became president of Preston North End. He was born near Deepdale in 1922 and remained in the Preston area. He was incredibly popular with the city's people, appearing regularly at local events into his old age.

Finney was nicknamed the "Preston Plumber" after completing an apprenticeship with his family's plumbing business. He was knighted in the 1998 Queen's New Year Honours list.

Preston's Deepdale stadium is currently located on Sir Tom Finney Way and the ground's old West Stand was renamed the Sir Tom Finney Stand in 1995, with his image on its seats

Before he died, former team-mate Bill Shankly, who himself made 297 appearances with Preston North End before going on to enjoy huge success as Liverpool manager, said that, if pressed, he would say Sir Tom was "the best player ever born".

Stanley Matthews, who died in 2000, played for Preston's biggest rivals Blackpool at the same time as Finney was playing. He once said: "To dictate the pace and course of a game, a player has to be blessed with awesome qualities. Those who have accomplished it on a regular basis can be counted on the fingers of one hand – Pele, Maradona, Best, Di Stefano, and Tom Finney."

Sir Bobby Charlton said: "Sir Tom Finney was one of the greatest footballers there has ever been – he was the type of player that people would travel a long way to see."