'This club is not just any old employer for me. It’s my passion,' says Muller on club's website 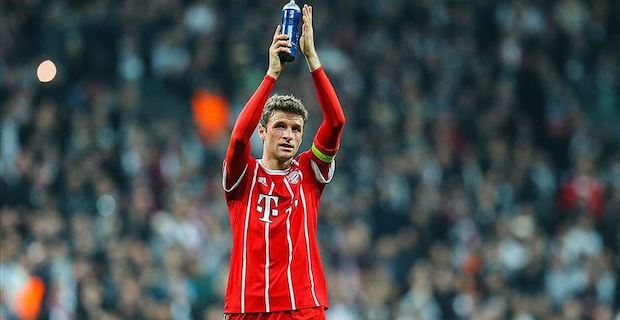 German forward Thomas Muller signed a new deal on Tuesday with Bundesliga giants Bayern Munich until June 2023. "I've been with FC Bayern for a good two-thirds of my life now, so you can't say that the club and I are just along for the ride – we fight for each other," Muller said on Bayern's website. "This club is not just any old employer for me. It’s my passion. I’m happy that I’ll be here for two extra years, and I’ll give everything on and off the pitch,” he added.

Since joining Bayern Munich in 2009 from the club's reserve team, Muller has helped it win eight German championships, the UEFA Champions League title, the FIFA Club World Cup, and the UEFA Super Cup. In addition to his club career, Muller helped Germany clinch the 2014 FIFA World Cup in Rio, Brazil. The 30-year-old forward has so far racked up 195 goals and 186 assists in 521 appearances for the Bavarian club.

Keywords:
UEFAThomas MullerBayern
Your comment has been forwarded to the administrator for approval.×
Warning! Will constitute a criminal offense, illegal, threatening, offensive, insulting and swearing, derogatory, defamatory, vulgar, pornographic, indecent, personality rights, damaging or similar nature in the nature of all kinds of financial content, legal, criminal and administrative responsibility for the content of the sender member / members are belong.
Related News