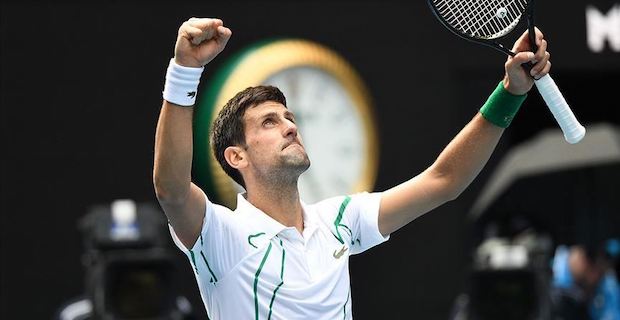 Novak Djokovic eliminated Roger Federer 3-0 on Thursday to earn his spot in the 2020 Australian Open men's final. Second-seed Djokovic won against Swiss veteran Federer with 7-6, 6-4, 6-3 sets in semifinals at Melbourne's Rod Laver Arena. The 32-year-old Serbian player is waiting to see who he will face in Sunday's final, either Austria's Dominic Thiem or Alexander Zverev from Germany.

Djokovic is a seven-time Australian Open winner but has managed to bag 16 grand slam titles in total.

World no. 3, Federer, 38, has the most grand slam titles of any male player in tennis history, with 20 championships in singles.

The 108th Australian Open is set to end on Sunday.

Keywords:
DjokovicNovak DjokovicAustralian Open Final
Your comment has been forwarded to the administrator for approval.×
Warning! Will constitute a criminal offense, illegal, threatening, offensive, insulting and swearing, derogatory, defamatory, vulgar, pornographic, indecent, personality rights, damaging or similar nature in the nature of all kinds of financial content, legal, criminal and administrative responsibility for the content of the sender member / members are belong.
Related News