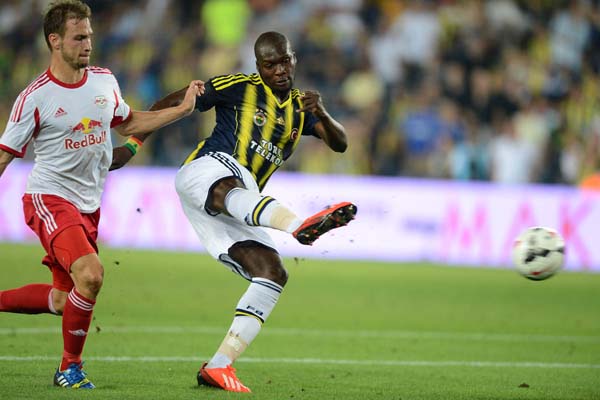 The Yellow Canaries overturned an early goal by the visitors to cruise to the playoff stage, capitalizing on a 1-1 first-leg draw played in Mozart's hometown. The Austrians opened the score just as in the first game when Spanish striker Jonathan Soriano took advantage of a huge defensive mistake in Fenerbahçe's area in the 4th minute to push the ball inside the net. However, unlike the first game, the Yellow Canaries did not wait for the injury time to respond to Salzburg's opener. Only three minutes later, Portuguese international Raul Meireles equalized with a terrific strike from outside the area putting the ball far from the reach of goalkeeper Putar Gulacsi.

Ersun Yanal had opted for an offensive display, characteristic of his coaching, in his official debut at the Şükrü Saraçoğlu stadium, starting the game with his three most dangerous players: Moussa Sow, Pierre Webo and Dirk Kuyt. The strategy payed off connection between the three strikers proved lethal in the 17th minute as Sow culminated a passing exchange between the former Liverpool star and the Cameroonian international with an unstoppable shot.

Fenerbahçe players also demanded a penalty for a handball in the 28th minute, after the ball was deflected by defense player Stefan Ilsanker's hand. But the Czech referee Pawel Gil continued the game.

With the momentum on their side, Fenerbahçe found a third goal, this time with Webo beating the goalkeeper one-on-one following an assist from his partner in crime, Sow.

Just when it seemed that the score would not change before the break, Salzburg came very close to reducing the score midfielder Mehmet Topal made a huge mistake in marking, however goalkeeper Volkan Demirel managed to save Alan Carvalho's shot on the edge of the area. The deflected ball came in front of Marco Meilinger, who fired it into the net, but Topal, redeeming himself of his mistake, was just in time to tackle it back outside the area.

The momentum in the second half switched to the Austrians, who had a goal disqualified in the 59th minute after the referee signaled offside on Alan Carvalho's play.

Demirel made another crucial save in the 75th minute to a half-volley from Soriano after a corner kick. Salzburg continued to put Fenerbahçe's defense under pressure until the last moments of the game, pushing it to another mistake in the 86th minute on an attack carried out by Sadio Mane. The young Senegalese found Stefan Hierlander unmarked inside the area. The Austrian striker's shot beat Demirel but was saved in the line by Michal Kadlec.

The score did not change in further Salzburg attacks and Fenerbahçe secured the 4-2 aggregate to move forward in the competition.

On a side note, Fenerbahçe fans made a tribute to Selçuk Yula, a star striker for the club who passed away Aug. 6. The players also stepped the pitch during the warm-up drills before the game with black t-shirts dedicated to Yula reading "You will always be in our hearts, great captain."