Manchester City come back from 1-0 deficit to win by 2-1 at Santiago Bernabeu Stadium, boosting chances for last eight 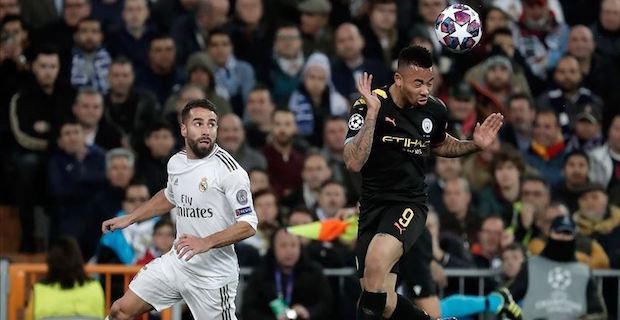 Manchester City earned a 2-1 victory Wednesday over Real Madrid in the UEFA Champions League Round of 16 first leg to return to England with a crucial advantage. Real Madrid's Spanish midfielder Isco broke the deadlock in the 60th minute, giving his team a 1-0 lead at the Santiago Bernabeu Stadium. But Manchester City's Brazilian forward Gabriel Jesus equalized with a header in the 78th minute, making it 1-1. Real Madrid's Dani Carvajal fouled Man City forward Raheem Sterling as the visitors were awarded a penalty. Belgian star Kevin De Bruyne scored the winning goal from a penalty kick in the 83rd minute.

Near the end of the match, Real Madrid were down to 10 men as Spanish defender Sergio Ramos was sent off after pulling down Jesus.

Jesus was outside Real Madrid's penalty box once he was fouled by Ramos. The 33-year-old Spanish veteran was the last man to stop Jesus illegally.

Man City grasped a precious win over Real Madrid to play in a more comfortable way in the second leg at home on March 17.

Real Madrid are expected to take risks in Manchester for sure, but they may lack Ramos, who has been a regular player for the Spanish powerhouse since 2005.

Olympique Lyon upset Italy's Juventus 1-0 in the first leg at OL Stadium in France. A first-half goal scored by French midfielder Lucas Tousart secured the home victory for Lyon. Cristiano Ronaldo-led Juventus were unable to find a way to score the equalizer.

In the second leg, Lyon will visit Juventus in Turin on March 17.

Keywords:
Champions LeagueManchester CityReal Madrid
Your comment has been forwarded to the administrator for approval.×
Warning! Will constitute a criminal offense, illegal, threatening, offensive, insulting and swearing, derogatory, defamatory, vulgar, pornographic, indecent, personality rights, damaging or similar nature in the nature of all kinds of financial content, legal, criminal and administrative responsibility for the content of the sender member / members are belong.
Related News