Turkish basketball giants aim to have 3rd win in row, Barcelona seek to extend their winning streak to 4 at home 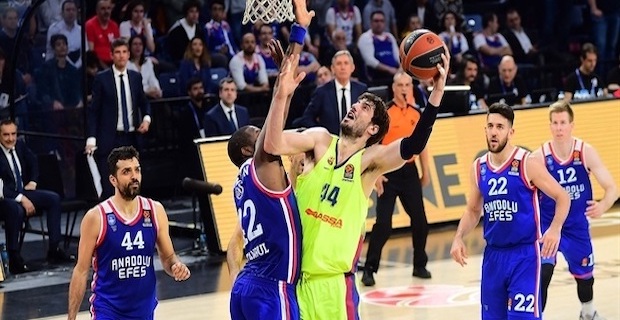 Istanbul's basketball giants Anadolu Efes will take on Spain's Barcelona in a Round 18 game of the Turkish Airlines EuroLeague on Friday. The game will start in Barcelona's Palau Blaugrana at 2000GMT. Anadolu Efes seek their third consecutive win in the EuroLeague as they are currently at the second position with a 14-3 record.

Barcelona are in the third place, having 13 wins and 4 defeats.

The Spanish team won seven out of eight games at Palau Blaugrana this season while they recorded three-game winning streak at home.

The Istanbul team beat Russia's Khimki Moscow 101-82 while Barcelona were defeated by KIROLBET Baskonia Vitoria-Gasteiz of Spain 76-74 in their Round 17 games.

Keywords:
Anadolu EfesBarcelonaEuroLeague
Your comment has been forwarded to the administrator for approval.×
Warning! Will constitute a criminal offense, illegal, threatening, offensive, insulting and swearing, derogatory, defamatory, vulgar, pornographic, indecent, personality rights, damaging or similar nature in the nature of all kinds of financial content, legal, criminal and administrative responsibility for the content of the sender member / members are belong.
Related News