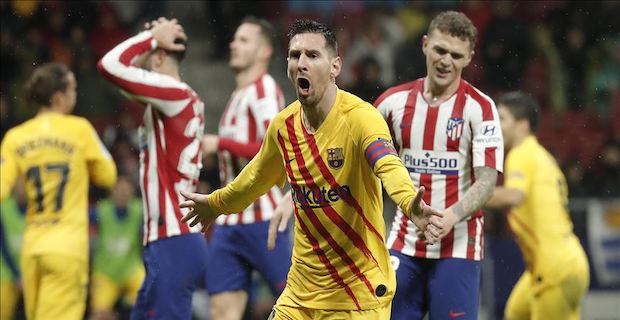 The runners-up Real Madrid also defeated Alaves 2-1 in an away match on Saturday.

After the week 14, Barcelona with 31 points were followed by Real Madrid with same points.

The La Liga giants, Barcelona and Real Madrid will meet in the famous El Clasico showdown in December.

The El Clasico between the fierce rivals will take place on Dec. 18 at the Nou Camp, the Spanish Football Federation previously announced.

This showdown had been scheduled to be held in Barcelona's home ground, Nou Camp Stadium, on Oct. 26.

However, the Spanish Football Federation (RFEF) decided to postpone it amid violent Catalan protests in Barcelona.

The new date Dec. 18 was taken after Real Madrid and Barcelona reached an agreement.

After the latest games in the top five European football leagues over the weekend, Liverpool, Barcelona, Inter Milan, Borussia Monchengladbach, and Paris Saint-Germain (PSG) filled the top positions of their respective leagues.

With this victory, Liverpool became undefeated in the league in the last 31 games.

The leader Liverpool with 40 points were followed by Leicester City with 32 points. Manchester City earned 29 points in 14 weeks.

Inter Milan climbed to the top spot in Italy's Serie A after the league's favorites Juventus had a shocking home draw against Sassuolo 2-2 on Sunday.

At home on Sunday, Inter beat S.P.A.L 2-1 in the week 14 to end the lead of reigning champs Juventus.

Currently, Inter top the league with 37 points, followed by Juventus with 36 and Lazio with 30 points.

The last eight years' champions Juventus remained undefeated in the Serie A this season with 11 wins and 3 draws.

Following the victory at home, Borussia Monchengladbach remain in the top spot with 28 points.

Title contenders Bayern Munich were defeated 2-1 by Bayer Leverkusen at home, an unexpected loss for Bayern.

Reigning champs Bayern Munich are now four points away from the top spot.

Meanwhile Schalke were one of the title competitors as the Gelsenkirchen team earned 25 points.

In the French Ligue 1, the match between Monaco and Paris Saint-Germain (PSG) was postponed because of bad weather in Monaco region.

"By decision of the Monaco authorities, AS Monaco - PSG, scheduled this Sunday at 21h is canceled and will be postponed to a later date due to weather conditions. This decision comes as the departments of Var and Alpes-Maritimes are being placed on Red Alert for rain and flooding. The Competition Commission of the LFP will fix the date of the match at a later date," Monaco said on their website.

The PSG top the league with 33 points, are followed by bitter rivals Olympique Marseille with 28 points.

Angers come at third with 24 points.

Keywords:
BarcelonaAtletico
Your comment has been forwarded to the administrator for approval.×
Warning! Will constitute a criminal offense, illegal, threatening, offensive, insulting and swearing, derogatory, defamatory, vulgar, pornographic, indecent, personality rights, damaging or similar nature in the nature of all kinds of financial content, legal, criminal and administrative responsibility for the content of the sender member / members are belong.
Related News