Ozil is on international duty and the medical will take place in Germany. 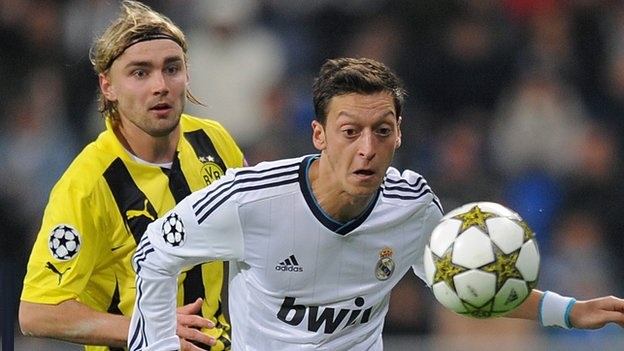 Arsenal are close to completing the £42.4m signing of Real Madrid midfielder Mesut Ozil, which would break their club record by £27.4m. The 24-year-old has agreed personal terms but must have a medical before Arsenal can confirm his signing. Ozil is on international duty and the medical will take place in Germany. The Gunners are also in talks with Chelsea to sign 28-year-old striker Demba Ba on loan and want Palermo goalkeeper Emiliano Viviano, 27.

Spanish newspaper Marca are reporting that Mesut Ozil's proposed move from Real Madrid to Arsenal will make him the most expensive sale in Real's history, eclipsing the 43m Euros that Manchester City paid them for Robinho back in 2008. Ozil, who has Turkish parents, on his footballing ability: "My technique and feeling for the ball is the Turkish side to my game. The discipline, attitude and always-give-your-all is the German part."

Arsenal have failed in high-profile attempts to sign Liverpool striker Luis Suarez and Gonzalo Higuain, a former team-mate of Ozil at Real Madrid, this summer.

But they are close to capturing Ozil after Gareth Bale's world-record £85.3m switch from Tottenham to Real triggered further deals on the final day of the transfer window. (BBC Sport)