An early final in Copa America: Brazil vs Argentina

Argentina (14) and Brazil (8) have a combination of 22 Copa America titles between themselves, the two favourites face off in the semi-finals this year. The "Battle of the South Americans" will take place on 1:30am on Wednesday, at the Estádio Governador Magalhães Pinto. 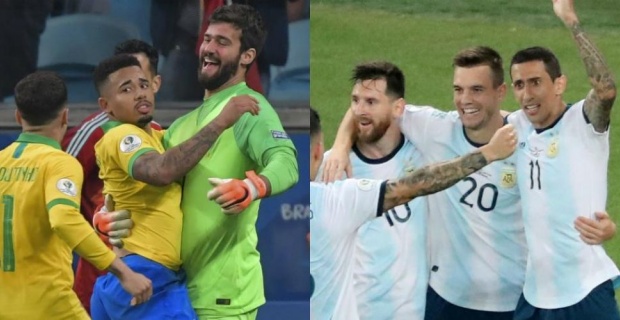 Brazil is so far undefeated in the competition, they collected 7 points in Group A with wins against Bolivia & Peru and a draw against Venezuela. After a goalless draw in the quarter-finals, Brazil came away with a tight 4-3 victory in a penalty shoot-out against Paraguay. Everton Soares and Philippe Coutinho were the top scorers for the Verde-Amarela, with 2 goals each. It is a huge advantage for Brazil that the Copa America takes place in their homeland this year, a lot is expected from the fans.

Argentina on the other hand had a rusty start, with only one victory in Group B. They kicked-off horrendously with a 2-0 loss against Colombia, and a 1-1 draw against Paraguay. However their 2-0 victory against guest side Qatar allowed them to come 2nd out of their group. Goals from Lautaro Martinez and Giovani Lo Celso, allowed Argentina to win 2-0 against Venezuela in the quarter-finals. Martinez stands as the top scorer of Argentina in the competition, with 2 goals. After their 2-0 victory, team captain Lionel Messi even said “It is not my best Copa America, I am not having the one I had hoped,”.

These two teams have a massive history in the Copa America.They have faced each other in 109 games, Brazil winning 45 and Argentina winning 39 times, they have drawn 25 times. The last match-up of the 'South American El Clásico' was in October 2018, where Brazil were victorious with 90+3 minute goal from Miranda. The game was considered to be the fifth edition of the Superclásico de las Américas, and took place in the King Abdullah Sports City.

The reigning champions Chile (2016), defeated Colombia 5-4 on penalties after a goalless draw. They are now awaiting for the victorious side from the clash between Uruguay and Peru.

Keywords:
Copa AmericaArgentinaBrazilMessiCoutinho
Your comment has been forwarded to the administrator for approval.×
Warning! Will constitute a criminal offense, illegal, threatening, offensive, insulting and swearing, derogatory, defamatory, vulgar, pornographic, indecent, personality rights, damaging or similar nature in the nature of all kinds of financial content, legal, criminal and administrative responsibility for the content of the sender member / members are belong.
Related News