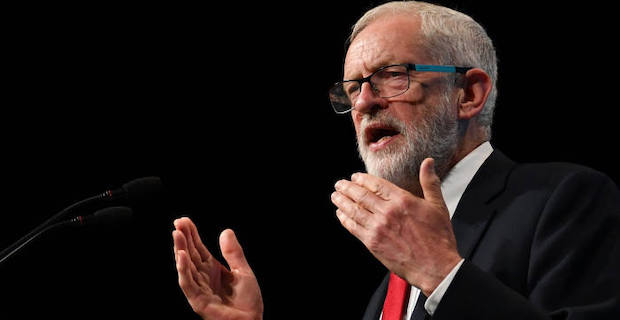 Britain’s opposition parties gathered on Monday to explore ways to force Prime Minister Boris Johnson to abide by a legislation that blocks a no-deal Brexit. Gathering at the Labour Party leader Jeremy Corbyn’s office, leaders of the opposition parties discussed how to ramp up the pressure on Johnson, who has repeatedly said he would not ask for an extension beyond Oct. 31 and the U.K. would leave the EU on that date.

The meeting saw the attendance of Scottish National Party’s leader in Westminster Ian Blackford and Lib Dems leader Jo Swinson as well as representatives from other opposition parties and independent MPs.

During the meeting, the parties discussed a no-confidence vote to bring down Johnson’s government if he denies to obey the law, also known as the Benn act, which blocks a no-deal exit from the bloc at the end of October.

They remained in agreement to look into all options to stop the country’s departure without a deal, including a national unity government to succeed Johnson when and if he fails to find majority for confidence vote.

The numbers in the House of Commons do not look in favor of the prime minister at the moment, especially after the removal of party whip from 21 MPs earlier this month as they voiced and voted different Brexit opinions than Johnson’s.

The opposition parties however have failed to agree on who should lead such a national unity government, which would first block the no-deal exit by securing an extension to the current Brexit deadline of Oct. 31 and then initiate a general election.

Corbyn has said the interim government after Johnson is ousted should be led by the opposition leader thus by himself.

“The position is quite simply this: when a government collapses then the Leader of the Opposition is invited to form an administration,” he said in an interview.

However, Lib Dem leader Jo Swinson rejected the idea of forming a government under Corbyn.

“I have been crystal clear but I will do so again – Jeremy Corbyn is not going into Number 10 on the basis of Liberal Democrats’ votes,” she said.

"It is positive that the cross-party discussions that are being had continue to be constructive,” she said, while ruling out a no confidence motion this week.

"It is understood that, if anything, that would just increase the risk of a no deal Brexit and therefore play in Boris Johnson's hands,” she said.

If Boris Johnson loses such a no confidence vote and cannot secure enough votes in 14 days following the vote, the Queen will ask any other MPs in the House of Commons to form a government which could receive confidence of the MPs.

Johnson who is in the Conservative Party conference in Manchester has insisted that the country would leave the EU on Oct. 31 with or without a deal, rejecting the law that would force him to request further extension to Article 50.

Last week, the country's top court said Johnson acted "unlawfully" to prorogue the parliament for 5 weeks until Oct. 14 and declared the move "null and void". The prorogation move was harshly criticized by the opposition as they saw it as a trick to keep parliament out of the way to force a no-deal Brexit on Oct. 31.

Keywords:
Boris JohnsonEULabour PartyJeremy Corbyn
Your comment has been forwarded to the administrator for approval.×
Warning! Will constitute a criminal offense, illegal, threatening, offensive, insulting and swearing, derogatory, defamatory, vulgar, pornographic, indecent, personality rights, damaging or similar nature in the nature of all kinds of financial content, legal, criminal and administrative responsibility for the content of the sender member / members are belong.
Related News