Lavrov said Russia was ready to send troops to Syria to ensure the safety of U.N. chemical weapons 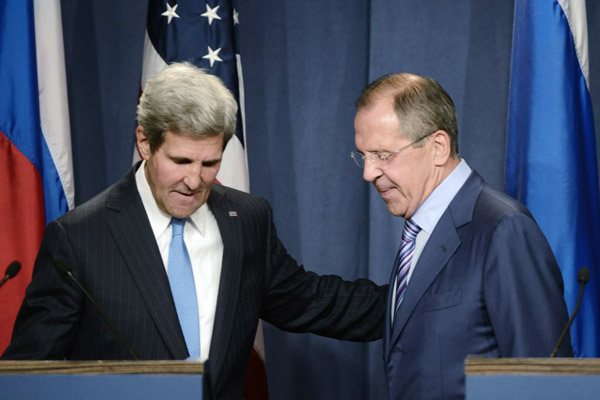 Russia accused the West on Sunday of trying to exploit a chemical weapons deal with Syria to push through a U.N. resolution threatening force against President Bashar al-Assad. Assad's government has handed over information about its chemical arsenal to a U.N.-backed weapons watchdog, meeting the first deadline of the ambitious U.S.-Russia accord which the U.N. Security Council is due to endorse in the coming days. But major powers on the council, who have disagreed throughout a conflict which has killed 100,000 people, remain divided over how to ensure compliance with the accord.

The United States, France and Britain want a council resolution issued under Chapter 7 of the U.N. charter, which could authorise sanctions or military intervention if Damascus reneges on its commitments.

Russia, which along with China has blocked three draft resolutions on Syria since the 2011 uprising against Assad erupted, opposes Western threats of force against an ally which Moscow has continued to arm and support during the civil war.

"They see in the U.S.-Russian deal not a chance to save the planet from significant quantities of chemical weapons in Syria, but as a chance to do what Russia and China will not allow, namely to push through a resolution involving (the threat of) force against the regime and shielding the opposition," Russian Foreign Minister Sergei Lavrov said.

Lavrov also said Russia, was ready to send troops to Syria to ensure the safety of U.N. chemical weapons inspectors.

"An international presence is needed on the perimeters of the areas where the experts will work," he said. "We are willing to send our troops and military police to participate.

"I do not think that there is a need for a major contingent. I think military observers will be sufficient."

Washington accused Assad's forces of carrying out the attack, which it said killed more than 1,400 people. It said a report by U.N. chemical weapons experts last week supported its view - an assertion which Moscow disputes.

Assad blamed rebels for the attack, saying it made no sense for his forces to use chemical weapons when they were gaining the upper hand and while U.N. chemical inspectors were staying in central Damascus.