Angela Merkel's centre-right coalition is set for a photo finish with her rivals, the final poll before Sunday's elections showed. 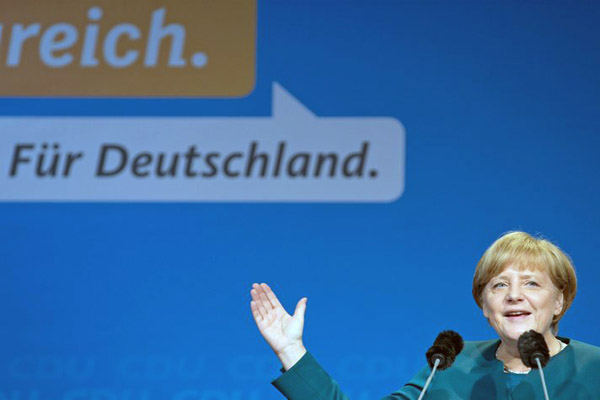 Merkel's conservatives scored 39 percent, with her pro-business allies, the Free Democrats (FDP), on six percent in the Emnid survey to appear in Sunday's Bild weekly.
Her main rivals, the centre-left Social Democrats, scored 26 percent and their preferred allies, the ecologist Greens, won nine percent.
Together with the far-left Linke party, the combined leftist opposition garnered 44 percent in the poll compared to 45 percent for Merkel's coalition.
However, the Linke has been rejected as a coalition partner by all major parties.
A wild card in the election are small parties.
A new eurosceptic Alternative for Germany party scored four percent, below the five-percent threshold to send MPs into the Bundestag lower house of parliament.
"This vote remains exciting right to the end," Bild quoted Emnid head Klaus-Peter Schoeppner as saying.
Key to the success of Merkel's current coalition is the precarious fate of her junior partners, the FDP, which crashed out of Bavaria's state parliament last Sunday.
The latest poll shows them narrowly staying in parliament but if that is not the case on election day, Merkel would have to find new partners -- most likely with her traditional rivals the SPD, with whom she ruled in a previous 2005-09 "grand coalition".
The poll was conducted between last Saturday and Friday morning among 2,047 people.
Your comment has been forwarded to the administrator for approval.×
Warning! Will constitute a criminal offense, illegal, threatening, offensive, insulting and swearing, derogatory, defamatory, vulgar, pornographic, indecent, personality rights, damaging or similar nature in the nature of all kinds of financial content, legal, criminal and administrative responsibility for the content of the sender member / members are belong.
Related News