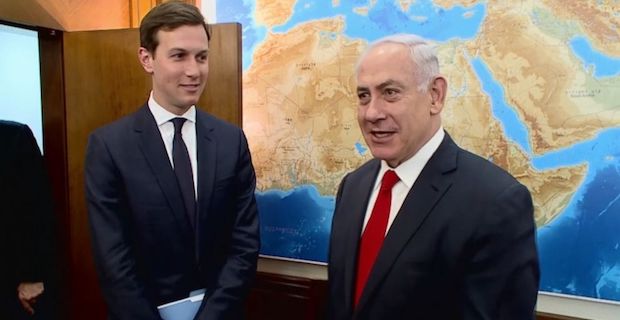 U.S. President Donald Trump's senior advisor and son-in-law, Jared Kushner met Wednesday with Israeli Prime Minister Benjamin Netanyahu as part of his Middle East tour. Netanyahu and Kushner met in the official office in West Jerusalem, according to a statement by the Prime Minister’s office.

No further details on the meeting were revealed.

Experts believe Kushner will share details of the "Deal of Century" plan that seeks to resolve the Israel-Palestine conflict with Arab leaders during his tour.

The U.S. plan will call on the Palestinians to make major concessions to Israel regarding Jerusalem’s status and the right of Palestinian refugees to return to their homes in historical Palestine, according to leaked details to the media.

Kushner has so far been to Jordan and Israel and he is expected to visit Morocco, Egypt, Saudi Arabia and United Arab Emirates in coming days.

Keywords:
NetanyahuKushner
Your comment has been forwarded to the administrator for approval.×
Warning! Will constitute a criminal offense, illegal, threatening, offensive, insulting and swearing, derogatory, defamatory, vulgar, pornographic, indecent, personality rights, damaging or similar nature in the nature of all kinds of financial content, legal, criminal and administrative responsibility for the content of the sender member / members are belong.
Related News