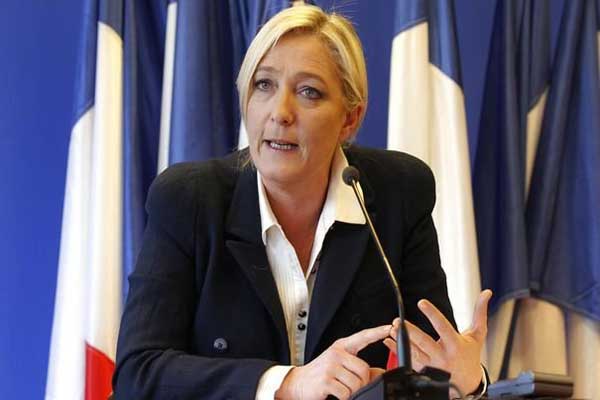 The leader of France's far-right National Front lost her right to legal immunity as a European Parliament deputy on Tuesday, exposing her to possible prosecution over a racism charge. Marine Le Pen's loss of immunity came at the request of a Lyon court three years after she was accused of inciting racial hatred for comparing Muslim street prayers to the occupation of France by Nazi Germany. A majority of parliamentarians voted to ratify the decision, as recommended by a judicial committee, a parliament official said after the hearing at the parliament's seat in the northern French city of Strasbourg. A public trial in France would be a setback for the National Front as it seeks to capitalise on her rising popularity to grab territory from the ruling Socialist Party and mainstream right in local and European Parliament elections next year. Le Pen's anti-immigrant, anti-EU party is notably gaining support at the expense of President Francois Hollande's Socialists in a darkening economic context, as high and rising joblessness fuels the spread of her euro-sceptic views.

The National Front has also profited from a tax evasion scandal that prompted the resignation of ex-Budget Minister Bernard Cazeneuve, stealing votes in his former home district during a by-election last month.

It is tipped to make strong gains in May 2014 European elections, with one survey by pollster YouGov in June showing it could reap 18 percent of the vote -- ahead of the Socialists but behind the centre-rightUMP party.

By comparison in 2009, when Le Pen won her EU parliament seat in the North-West France region, theNational Front scored a total of just 6.3 percent of the vote, versus 16.4 percent for the Socialists and 27.8 percent for the UMP.

Le Pen was ranked France's third most popular politician in a web-based poll conducted in May by web site L'Internaute. That placed her one position behind former President Nicolas Sarkozy, and 24 positions ahead of Hollande.

If found guilty of inciting racial hatred, she would face a maximum penalty of one year in prison and 45,000 euros in fines.