Erdoğan and May discussed about Cyprus over phone 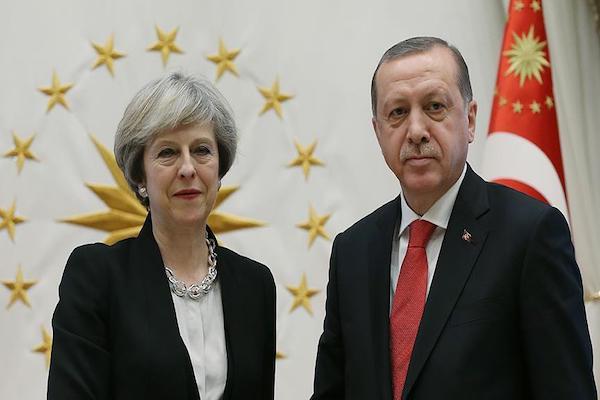 Erdogan and May highlighted the importance of reaching "a fair, lasting and comprehensive solution for both sides" by overcoming the deadlock in the Cyprus negotiations, the source, who spoke on condition of anonymity due to restrictions on talking to media, said. The UN is seeking a peace deal to unite Cyprus under a federal umbrella, which could also define the future of Europe's relations with Turkey, a key player in the conflict. The Eastern Mediterranean island has been divided since 1974, when a Greek Cypriot coup was followed by violence against the island's Turks, and Ankara's intervention as a guarantor power. The two leaders also confirmed their determination to enhance bilateral relations, especially economic and defense industry ties; they also resolved to strengthen cooperation in the fight against terrorism. May also condemned the recent killings of Turkey’s ruling Justice and Development (AK) party figures in the country and conveyed her condolences to Erdogan, the source added. According to an emailed statement from her office, “The prime minister offered her condolences following the killings of the president’s party colleagues in the southeast of Turkey this weekend. “They agreed this kind of brutality only strengthens our resolve to work together to tackle terrorism, and noted countering extremism would be a key topic for discussion at this week’s G20 summit in Hamburg.”