Ahmet Davutoglu charged Friday that starvation is being used as a weapon of war in Syria in a tactic reminiscent of the Middle Ages. 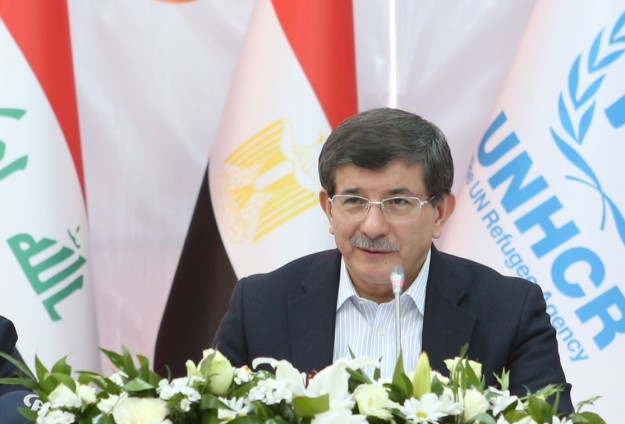 "We are witnessing the first major humanitarian tragedy of the 21st Century, comparable perhaps to the biggest tragedies of the past century," Davutoglu said.

His account appeared to corroborate comments made by the Syria researcher for Amnesty International, who said displaced people in the besieged Yarmouk refugee camp on the outskirts of Damascus, the Syrian capital, were subsisting on grass and shrubs.

"Humans don't usually eat grass, but these people pick it up and boil it up to seven times to get rid of the taste of bitterness, and it becomes a juice in order to feed their children," Cilina Nasser, the researcher, said late Thursday in London.

"They eat anything, Whatever can be eaten, they will eat it."

Davutoglu said dozens of people had died of starvation at Yarmouk Refugee Camp within the past few weeks.

Speaking at the second Ministerial Meeting of Syria Bordering Countries, Davutoglu said thousands of Syrians have been forced to flee to Turkey, Lebanon, Jordan and Egypt to find food, water and medicine. The number of Syrians fleeing to Turkey alone is around 700 thousand."

Co-chaired by Davutoglu and United Nations High Commissioner for Refugees, Antonio Guterres, the meeting was held at Harran Accommodation Center, a refugee camp in Harran district of Turkey's southeastern province of Sanliurfa.

"Getting together in Harran today ahead of Geneva is a call to the international community and humanity," Davutoglu said. "This is a call that says, 'Enough. Let's not be silent in the face of this big humanitarian tragedy of women, children and the elderly.'"

"There is evidence that starvation is clearly used as a war tactic in Syria, reminiscent of the Middle Ages," he said. "Cities and districts are under siege, and the delivery of humanitarian aid has not been allowed for months. People have been dying a miserable death."

He said the cities, homes and hearts of Syria's neighbors were open to the refugees. "No matter who does what, or remains silent, we will not be silent to your pain." he said.