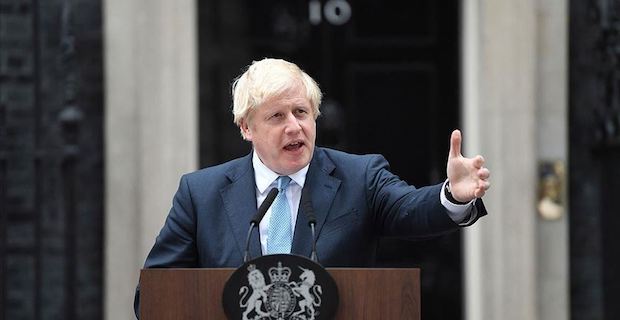 British prime minister Boris Johnson on Monday has warned rebel Tory MPs from voting in favour of legislation that would prevent a no-deal Brexit and request an extension from the EU as tensions rise between parliament and the government.

“So I say, to show our friends in Brussels that we are united in our purpose, MPs should vote with the government against Corbyn’s pointless delay” Johnson said in his statement.

“I want everybody to know – there are no circumstances in which I will ask Brussels to delay. We are leaving on 31 October, no ifs or buts” he added, emphasizing on the point that a vote for the bill would be a vote for Corbyn into power.

Johnson also made clear that in recent weeks the chances of a new deal being negotiated between London and Brussels has been rising as, according to Johnson, the EU can see the government’s clear vision for a future relationship with the EU and that the U.K. is determined to strengthen its position to leave the bloc “come what may”.

“We will not accept any attempt to go back on our promises or scrub that referendum. Armed and fortified with that conviction I believe we will get a deal at that crucial summit in October” Johnson said, adding that “a deal that parliament will certainly be able to scrutinize”.

The prime minister, however, failed to mention what new deal was being negotiated and whether or not it would be similar to his predecessor’s deal which was voted down a historic three times by parliament and whether he has found an alternative to the Irish backstop.

Johnson also repeated his promises of adding a $41 billion fund to the National Health Service, recruiting a further 20,000 police officers for the U.K.’s streets and further spending on primary and secondary education for British schools and pupils.

The prime minister also stated his opposition to calling a general election, a move that was widely expected from him, instead calling on MPs to “let our negotiators get on with their work Without that sword of Damocles over their necks. And without an election, which I don’t want and you don’t want”.

Johnson’s delivered his statement following an emergency cabinet meeting and the announcement that opposition and rebel Tory MPs had finalised the anti no-deal Brexit legislation that would prevent the government from leaving the EU without a deal and request an extension to allow a new deal to be negotiated.

Last week in a move that has considerably risen tensions between the executive and legislature, Johnson, with the queen’s consent, suspended parliament for five weeks, effectively denying MPs the time and chance to stop his government from taking the U.K. out of the EU without a deal.

The EU have repeatedly stated that they will not negotiate on a no-deal Brexit and that the current withdrawal agreement, agreed by Theresa May, with the Irish backstop is the only workable deal unless Johnson finds a better alternative.

The U.K. is expected to depart the EU on October 31.

Keywords:
Boris JohnsonBrexitNo-deal Brexit
Your comment has been forwarded to the administrator for approval.×
Warning! Will constitute a criminal offense, illegal, threatening, offensive, insulting and swearing, derogatory, defamatory, vulgar, pornographic, indecent, personality rights, damaging or similar nature in the nature of all kinds of financial content, legal, criminal and administrative responsibility for the content of the sender member / members are belong.
Related News