A bomber driving a truck packed with 1.5 tonnes of explosives killed at least 31 people and wounded dozens in the Syrian city of Hama on Sunday 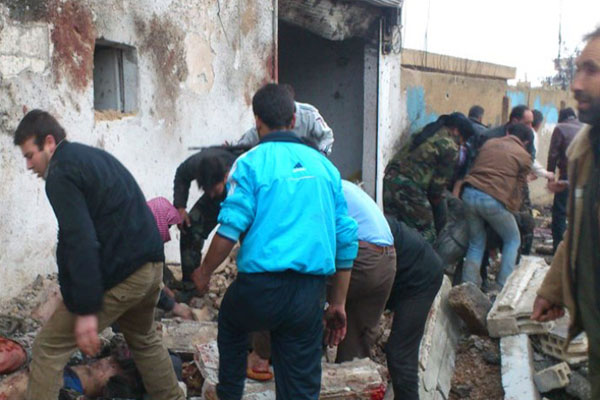 A bomber driving a truck packed with 1.5 tonnes of explosives killed at least 31 people and wounded dozens in the Syrian city of Hama on Sunday, state media and a monitoring group reported. The man blew himself up inside the vehicle on a busy road on the outskirts of the city in central Syria, the SANA news agency said. It blamed "terrorists", the term it uses to describe rebel forces trying to topple President Bashar al-Assad. The pro-opposition Syrian Observatory for Human Rights said the attack targeted an army checkpoint but most of the dead were civilians. Syria's 2-1/2-year-old conflict began as peaceful protests but has turned into civil war. More than 100,000 people have died, according to United Nations figures, in fighting that is now spread across most of the country. According to the Observatory, the suicide bomber was from the Nusra Front. Pictures on Syria TV showed firemen trying to put out huge fires as black smoke rose from charred trucks and cars. Rebels also used a car bomb a day earlier to attack a checkpoint on the outskirts of Damascus. Heavy clashes erupted after the blast and continued on Sunday.

Rebels said they seized the first checkpoint and were now fighting to capture a second one down the road. The checkpoints, to the southeast of the capital, sit between the rebel-held suburb of Mleiha and the government-held suburb of Jaramana.

"These checkpoints are the fortress between us and the next air force defence site," said Nidal, a rebel speaking by Skype. "If we can destroy it we can liberate the base."

Syrian military jets have pounded nearby rebel-held areas. Rebels hold several suburbs ringing the capital but have yet to make deep inroads into the capital, due to a sustained army blockade.

Doctors in one suburb to the west of Damascus, Mouadamiya, have reported an increasing number of deaths due to malnutrition.

A fighter in the eastern suburbs said government forces had blocked the main entry point for food and supplies to that region two days ago.

"That is where we used to get our food and flour. If it stays closed, we will be destroyed," he said, asking not to be named.

International powers are trying to bring the two sides to peace talks in Geneva next month. But the opposition has been reluctant to attend and Assad's government says it will not negotiate the president's removal.