Americans believe that racism still prevails with reflections on the US 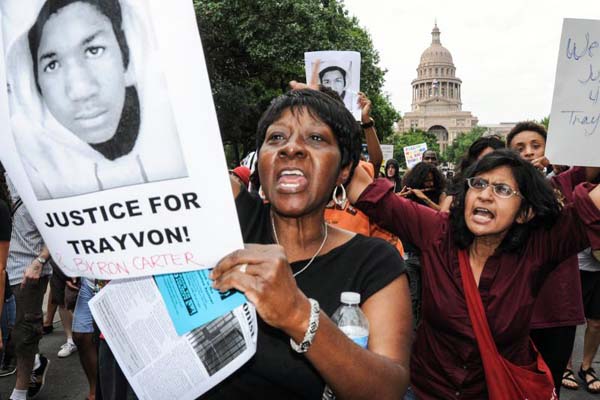 Americans attending the "Justice for Trayvon" rally in Washington D.C. believe that racism still prevails in the country with reflections on the US judicial system. African-Americans and anti-racists are content with US President Barrack Obama's Friday remarks on Zimmerman verdict. Protests continue in several US cities, a week after the acquittal of 29 year-old white-Hispanic neighborhood watchman George Zimmerman murdering 17 year-old Trayvon Martin, some turning violent as tension escalated across the country. Florida's six-person all-female jury acquitted Zimmerman on July 13 in Martin's February 26, 2012, shooting death, inciting anger among many who considered the incident racially motivated murder.

President Obama tried Friday to explain why African-Americans were upset about last week's acquittal of Zimmerman in the shooting death of Trayvon Martin.

"Trayvon Martin could have been me 35 years ago," Obama noted in a surprise appearance at the daily briefing.

His remarks drew gratitude especially from African-Americans who regard his speech as a good reflector of their feelings.

Attending the "Justice for Trayvon" rally in New York, Martin's parents told they were "deeply honored and moved" that Obama spoke publicly about their son, saying the president's comments "give us great strength at this time."

Over a thousand demonstrators in the US capital Washington gathering in front of the federal court protested the acquittal of 29 year-old white-Hispanic George Zimmerman murdering 17 year-old Trayvon Martin.

Attending the protest in Washington, an African-American demonstrator named Fiona stated that the acquittal of Zimmerman was "unacceptable", calling upon the federal government to step in the verdict and protect the civil rights of the American people.

She stressed that the examples of racist discriminiation they faced were not a recent phenomenon limited with the Zimmerman verdict, but dated back to hundreds of years ago.

Harsly criticizing the US law on self-defense "Castle Doctrine," allowing some use of deadly force to protect yourself inside your home or (in some states) anywhere you legally have a right to be, Fiona said the law was only enforced for Zimmerman not for Trayvon.

"The federal government must protect my rights and provide equal protection for everyone. I cannot travel to Florida because I don't feel safe due to this law," she added.

Michael Rice, an African-American with a Trayvon Martin tattoo on his back, argued that "The slavery in the past has turned into modern slavery. The physical slavery has been replaced by mental slavery."

"Justice may have not been for Trayvon but it can be for the children of the future, sadi Rice, highlighting that they united against the injustice in the US which he believed to yield a result.

A white women named Candice said she attended the protest to "show especially as a middle-aged white American woman that not everyone has a discriminatory attitude towards the African-American youth."

Underscoring that the courts' decree did not reflect justice, she argued that there was racism in the US.

Candice believed the new generation, unlike their predecessors, were far better in rejecting racism, saying "My three children at their 20s do not make any differentiation between their friends based on their accent, skin colur or sexual orientation. They see all of them as their friends."