The UK economy shrank at the fastest pace since 2008 in the first three months of the year as coronavirus forced the country into lockdown. 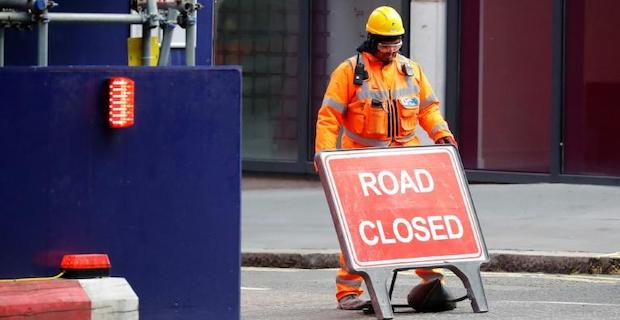 The Office for National Statistics said the economy contracted by 2% in the three months to March, following zero growth in the final quarter of 2019. The decline was driven by a record fall in March, and reflects just one full week of lockdown. Analysts expect a bigger economic slump in the current quarter. This is the first official growth estimate since the government introduced social distancing measures at the end of March.

Ruth Gregory, senior UK economist at Capital Economics, said the figures showed the UK economy was "already in freefall within two weeks of the lockdown going into effect". She added: "With the restrictions in place until mid-May and then only lifted very slightly, April will be far worse." While analysts expected a larger quarterly decline of 2.6% in the first three months of the year, it still represents the biggest contraction since the end of 2008, when Lehman Brothers collapsed. 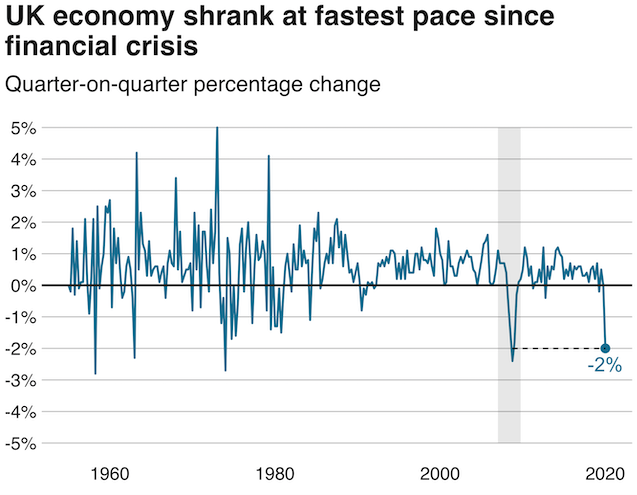 The ONS said there had been "widespread" declines across the services, manufacturing and construction sectors. This includes a record 1.9% fall in services output, which includes retailers, travel agents and hotels. It added: "This is the largest quarterly contraction since the global financial crisis and reflects the imposing of public health restrictions and voluntary social distancing put in place in response to the Covid-19 pandemic".

The figures come as some of the lockdown restrictions are starting to be eased. Some employees in England who cannot work from home are now being encouraged to return to their workplaces. Sectors "allowed to be open, should be open", the government says. These include food production, construction and manufacturing. In other developments, estate agents in England can now reopen, viewings can take place and removal firms and conveyancers can re-start operations, so long as social-distancing and workplace safety rules are followed. On Tuesday, Chancellor Rishi Sunak announced an extension of the furlough scheme subsidising wages to the end of October. While the scheme was "expensive", he told the BBC that the cost to society of not doing it would be "far higher".

Keywords:
UK EconomyFinancial Crisis
Your comment has been forwarded to the administrator for approval.×
Warning! Will constitute a criminal offense, illegal, threatening, offensive, insulting and swearing, derogatory, defamatory, vulgar, pornographic, indecent, personality rights, damaging or similar nature in the nature of all kinds of financial content, legal, criminal and administrative responsibility for the content of the sender member / members are belong.
Related News