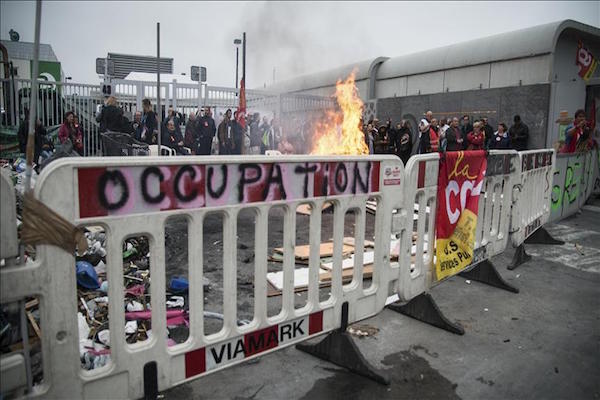 Police said the arrestees were detained at checkpoints with “objects can be used as projectiles.” They are among 100 people classified as banned from taking part in demonstrations, according to police.

Thursday’s march is under tight security, with more than 2,000 police deployed and checkpoints set at the entrances of the streets all around the route of the march.

The demonstration had initially been banned by police for security reasons before organizing unions and Interior Minister Bernard Cazeneuve reached a compromise Wednesday.

The restriction had been made amid security concerns, as the country hosts the Euro 2016 football tournament.

A June 14 Paris march saw clashes between hundreds of masked individuals and police. At least 39 people were injured and several properties damaged, including the Necker Hospital for Sick Children.

Earlier on Thursday, Philippe Martinez, head of the CGT, the country’s largest union, condemned the rioters and accused Prime Minister Manuel Valls of escalating the situation.

"Every time we try to calm things down, the prime minister throws fuel on the flames again," Martinez said on French broadcaster BFMTV.

Unions have been protesting and striking since March 9. They are demanding that the left-wing government scrap a controversial labor bill - dubbed the El Khomri law after Labor Minister Myriam El Khomri - claiming it paves the way for fundamental changes at the expense of workers’ rights.

French President Francois Hollande, for his part, said his government would not withdraw the reforms.

“We will take this bill to the finish line," Hollande told reporters Thursday.