The event was held to honour and acknowledge the contribution of Sikhs who have a long history of serving alongside the British Armed Forces. 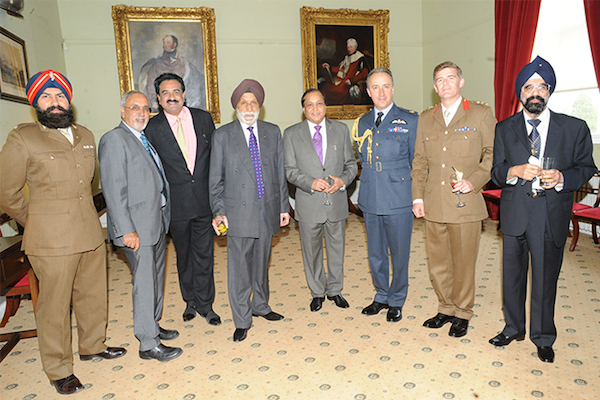 The event was held to honour and acknowledge the contribution of Sikhs who have a long history of serving alongside the British Armed Forces. The dinner was attended by over 100 distinguished guests including members of the Armed forces of Indian origin.

Starting with drinks and canapés in the Old College building, guests were then guided to the grand steps at the front of the magnificent building for an exceptional performance by the Band of the Gurkhas. The Chief of the General Staff, General Sir Nick Carter, KCB, CBE, DSO, ADC Gen presided over the proceedings along with Dr. Rami Ranger CBE, Chairman of the British Sikh Association, who took the salute.

The Chief of the General Staff addressed the guests and praised the contribution of Sikh soldiers in both of the great wars. He said they had distinguished themselves and had left a permanent legacy of their bravery in British history.

The guests were then taken to the prestigious Indian Army Memorial Room for dinner and speeches.

Major General Paul Nanson CBE, Commandant of the Royal Military Academy Sandhurst, welcomed the guests and said he was pleased to have the members of the Sikh community at Sandhurst. He mentioned the first ever Sikh soldier who passed out from the Academy was Maharaja Duleep Singh who was an exceptionally good cadet. He introduced the stained glass windows of the Indian Army Memorial room that commemorate the Indian Army’s service in WW1, of which one has the image of a Sikh soldier which was chosen because of the significant contribution made by Sikh regiments during battles. He further expressed his desire to engage with the Sikh community and to encourage them to join their armed forces as they once did in numbers, adding that the British Army does not care about background or religion but helping young people realise their potential and go into an honourable profession which offers opportunity, challenge, adventure and responsibility.

Mr Jasdeep Singh, the Curator at the National Army Museum spoke about the vast Indian Army memorabilia which spans a period of 250 years and contains over 110,000 objects. He confirmed that much of the collection relates to Punjab and in particular the Sikhs from the days of the British East India company right up to the partition of India in 1947. He added that the collection shows how the Sikh Symbol of the “Khanda” has changed and evolved into the modern symbol we see today.

Dr Rami Ranger CBE, Chairman of the the British Sikh Association said - “It is an honour and privilege for me to be speaking from the Indian Army Memorial Room at the Royal Military Academy, Sandhurst. A place from where illustrious soldiers are trained to defend our way of life at any cost to themselves”. He added that the room reminded everyone of the common military history between the Sikhs and the British going back centuries, “symbolising our loyalty towards each other and above all, for King & Country”. He spoke of the great battles the Sikh soldiers had fought, including the battle of Saragarhi where just 21 brave Sikh soldiers made a stand and defended a British post against 10,000 Afghan tribesmen. The Sikh soldiers died fighting with valour waiting for reinforcements to arrive. Dr Ranger called for the resurrection of a Sikh Regiment in the British Army to bring resurrect the Sikh history of courage and loyalty for our Queen and Country. He added further that though it would be called the Sikh Regiment it should be open for anyone wishing to join regardless of race or religion in order to inspire people from all backgrounds in line with the Sikh doctrine of equality for all and fighting for the oppressed. He further added, “A Sikh Regiment would raise the profile of the Sikhs in Britain and would stop attacks on them as a result of mistaken identity.”

Hon. Richard Harrington MP, Minister at the Home office, spoke about charity, welfare and hospitality being at the core of the Sikh culture. He added, that as well as being brave warriors on the battle-field, Sikhs are known for their caring nature citing an example of the Sikh Welfare and Awareness team giving food to the homeless on the Strand, London.

Dr Virander Paul, Deputy High Commissioner of India said he was delighted to be invited by the British Sikh Association to such a wonderful and prestigious evening. He said that to speak at the dinner where British Sikhs and the wider British Indian armed forces personnel were present was a brilliant example of the friendship India has with the United Kingdom.

The Guest of Honour, the Rt. Hon. the Earl Howe PC, Minister of State for Defence spoke about the rich history of the Sikhs in the British armed forces. He said that the Sikhs were an asset when entering the armed forces. He spoke about the challenge the Prime Minister had set, that by 2020 at least 10% of the Armed Forces recruits should come from Black, Asian and Minority Ethnic communities. He said that the Armed Forces would benefit a great deal as this recruitment would provide a valuable insight into other cultures. He also stated that the Government and Armed forces needed the help of the Sikh Community to communicate a message to the ethnic youth that they recruit from all backgrounds regardless of race or religion and with all three, the Armed forces, the Government and the Sikhs working shoulder to shoulder, “wearing our shared values on our sleeves” would no doubt make history together again.

In his closing remarks, Dr Sukhbir Kapoor OBE, Secretary General of the British Sikh Association, spoke of the many Sikh Generals and soldiers who had been praised by British Generals for their chivalry and bravery and praised the “honour of their turbans”. He added that there may not be a single Sikh house in Punjab that had not sent either a son or daughter to fight in the British Indian or Indian Armies. He went on to thank everyone present for making the event memorable and especially the service providers including Ragamama and the E.S.S. for providing delicious food and a pleasant service, Mr Ranjit Walia for the photography and the Band of the Gurkhas for giving everyone a performance they would never forget.

Guests enjoyed the rest of the dinner and had a chance to tour the building and view the paintings and artefacts of Indian soldiers who had served in the British Army.