Reactions from across the globe began pouring in late Thursday after a terror attack struck the southern French city of Nice, killing scores. 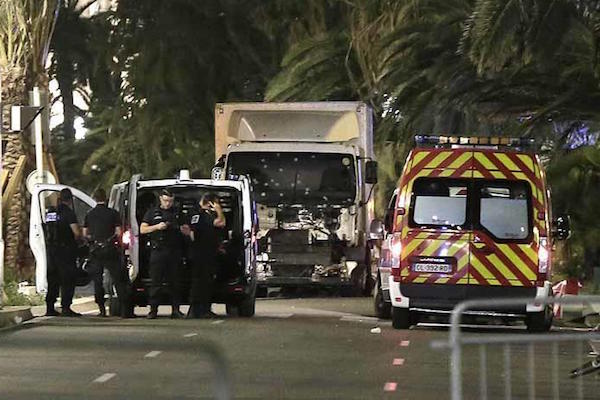 Reactions from across the globe began pouring in late Thursday after a terror attack struck the southern French city of Nice, killing scores. At least 84 victims were killed and many injured when a truck ran over crowds during Bastille Day celebrations.

Shortly after news of the tragedy broke, U.S. President Barack Obama condemned the attack “in the strongest terms”, saying Washington stands in “solidarity and partnership” with its oldest ally.

“On this Bastille Day, we are reminded of the extraordinary resilience and democratic values that have made France an inspiration to the entire world,” he said in a statement, “and we know that the character of the French Republic will endure long after this devastating and tragic loss of life.”

"My thoughts are with the victims and their families," he said on Twitter. "Terror is always brutal wherever or in whatever form or with whatever motiv[at]es it.”

"Germany stands side by side with France in fight against terrorism, united with many, many others. I am very convinced that we would win this fight despite all the difficulties,” she said on Friday, at a press conference in Mongolia’s capital Ulan Bator.

Merkel emphasized that the European and Asian leaders gathered there for a two-day Asia-Europe Meeting (ASEM) summit stand united with France.

Also in Ulan Bator, Donald Tusk, president of the European Council, wrote on Twitter, "Tragic paradox that the subject of Nice attack was the people celebrating liberty, equality and fraternity.”

He said European and Asian leaders also discussed terrorism and regional cooperation at the ASEM summit.

Following the attack, Italy tightened security along its land border with France – which lies some 30 kilometers (19 miles) from Nice, on the Mediterranean – the country's Interior Minister Angelino Alfano said in a statement.

Alfano said he had called the counter-terrorism committee for an emergency meeting.

Newly appointed British Foreign Secretary Boris Johnson said the attack represented a “continuing threat to us and the whole of Europe”.

Speaking to reporters on Friday morning, Johnson said: “Obviously our thoughts are very much with the people of France and Nice. An absolutely appalling incident”.

He added that one U.K. national was among the injured.

NATO Secretary General Anders Fogh Rasmussen denounced the attack that “targeted innocent people and the core values for which NATO stands.” “But terrorism will never defeat democracy, freedom and our open societies,” Fogh Rasmussen said in a statement.​

The Vatican also condemned the attack. Its spokesman Federico Lombardi said, “On behalf of Pope Francis, we join in solidarity with the suffering of the victims and of the entire French people this day that should have been a great holiday. We condemn in the strongest way every demonstration of senseless violence, of hatred, terrorism and any attack again peace.”

Council of Europe Secretary General Thorbjorn Jagland issued a statement denouncing the attack, saying, “On 14 July, the day when France and the world celebrate the birth of the French Republic, when the call to ‘liberté, égalité, fraternité’ rings in the hearts of all democrats, the host nation of the Council of Europe has been the scene of another murderous attack.”

Pedro Agramunt, head of the Parliamentary Assembly of the Council of Europe (PACE), said, "I strongly condemn the attack in Nice on Bastille Day. It is an attack on France – one of our member states – and an attack on Europe, our symbols and the values that unite us.” He added, "At such terrible moments we must firmly condemn terrorism and express solidarity with the people and the member states affected."