Leaders from around the world expressed sadness and anger Wednesday, after an overnight terror attack on Turkey’s central airport in Istanbul left at least 36 victims dead and 147 others injured. 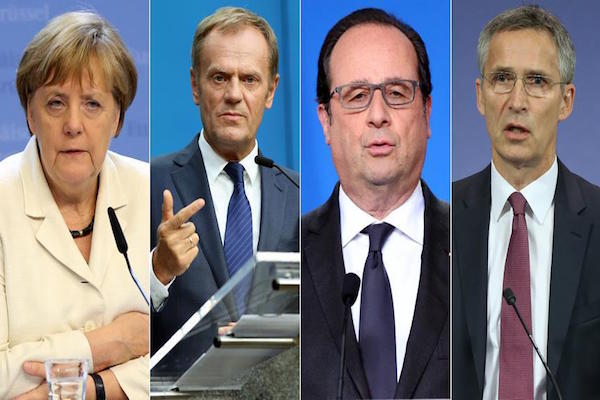 ANKARA-Leaders from around the world expressed sadness and anger Wednesday, after an overnight terror attack on Turkey’s central airport in Istanbul left at least 36 victims dead and 147 others injured.

In an early morning statement, Malaysian Prime Minister Najib Razak condemned the suicide bombers, describing the attack as a “heinous act,” and called on Muslim countries to unite in combating terror.

“Malaysia stands firm and ready to unite with all countries in the fight against the scourge of terrorism," he said, offering his condolences to the families of the victims, and extended Malaysia’s assistance to Turkey.

“I strongly urge Muslim nations to unite and increase cooperation, especially in condemning and combating the acts of terror by those who blaspheme the name of Islam,” he said in Facebook and Twitter postings.

“Appalled by attack in Istanbul tonight. Thoughts and prayers with all those affected,” he said.

The foreign minister of France, Jean-Marc Ayrault, tweeted that he was shocked, and that the French consulate in Istanbul is ready to work with Turkey.

Belgium, which recently suffered a terror attack, also condemned the deadly attack and empathized with the victims.

“Our thoughts are with the victims of the attacks at Istanbul's airport. We condemn these atrocious acts of violence in Istanbul,” Prime Minister Charles Michel said.

Albanian Prime Minister Edi Rama was scheduled to land in Turkey for an official visit just prior to the attack, prompting Foreign Minister Ditmir Bushati to strongly denounce the blast.

“Strongly condemn terrorist attack in Istanbul Airport. Our thoughts are with the victims and their families,” he said.

“Disgusted and appalled by the new terrorist attack in Istanbul. We stand by our neighbors, our friends, against terror,” it said.

Council of Europe Secretary-General Thorbjorn Jagland wrote via Twitter that the EU stands by Turkey.

“Our member state Turkey suffers another deadly terrorist attack. We stand by you in these troubling times,” he said.

German Foreign Minister Frank-Walter Steinmeier said that he was shocked when he heard the news.

“Our thoughts go out the people of Turkey. Germany stands by them.”

EU foreign policy chief Federica Mogherini described the deadly attack as “another tragic terrorist attack in Turkey. The EU stands by the Turkish people. Our heart is with them all.”

“Terror rears its ugly head yet again in our friend and neighbor’s airport. Extremist violence is a global threat; we must confront it together,” he tweeted.

The Australian government condemned the terror attack and said it stood in solidarity with Turkey.

“Our government cannot but express our shock and worry in that a number of innocent people lost their lives to the terror attacks at the Istanbul's Ataturk airport," its foreign ministry said in a statement.

Pakistan’s Foreign Ministry expressed its condemnation of the attack.

"We offer our heartfelt sympathies and condolences to the bereaved families and to the brotherly people and government of Turkey. We also pray for the speediest and fullest recovery of those wounded in this despicable attack. We stand in strong solidarity with the fraternal people of Turkey in their fight against terrorism. There is no doubt that this scourge would be decisively defeated with Turkey's iron will and unshakeable resolve."