Wisdom School Bins it to Win it! 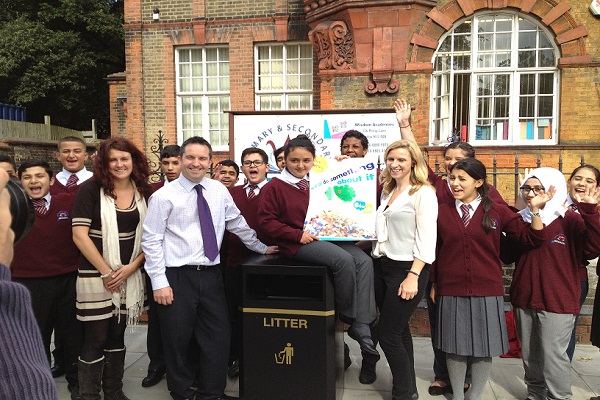 The Wisdom School in Haringey is being awarded the winning prize in the Bin it to Win it! competition, run by Wrigley and Keep Britain Tidy, today. Students at the secondary school impressed judges with an innovative campaign that they designed to reduce littering in and around their school.

As a reward, the school had their poster professionally designed and produced by Wrigley and will receive one of Keep Britain Tidy’s award winning1 talking bins. The bin – which speaks to you when you put any litter in it - makes responsible behaviour fun, encouraging people to do the right thing and bin their gum and rubbish.

Students at the Wisdom school decided to enter the competition after discussing the problem of littered gum in their school during a student council meeting. Their anti-littering campaign included clearing chewing gum from desks, producing posters and organising a litter-pick at a local park. Pupils even produced videos of their efforts to highlight the difference their activity made.

Damian Gray, Head of Humanities and Science at Wisdom School, who helped pupils with their campaign said:

"Academically, Wisdom school continues to be successful with 90% A* - C in 2012. This success is also prevalent in the students’ commitment to make a difference to the environment. The competition itself helped stimulate interest and enthusiasm for our students to build upon their passion for the environment. What started out as cleaning our classrooms ended in cleaning the local park! We hope to continue to build upon our success and passion for the environment by continuing to strive to create new ideas and projects that will also make a difference."

The second prize in the competition was won by Royton and Crompton School in Oldham, where the science club organised litter picks and wrote a rap about litter. The pupils at Royton and Crompton were visited by the Bin it! live tour earlier this year. The Bin it to Win it! competition was devised to build on the success of the award winning Bin it! education programme2 which teaches students between the ages of 11 and 14 about the responsibility they have to dispose of their own litter. . The Bin it! Tour has been running annually since 2006 and already reached 42,052 pupils at 289 schools in the UK so far. The programme was developed by Wrigley in partnership with specialist education communications agency EdComs, and is delivered via a workshop tour and an online curriculum-based resource for teachers on www.chewitbinit.com. Wrigley has now expanded the interactive resources available with the Bin it! video series; allowing any school to teach the lessons of the live workshop, and the Bin Beats online game.

“We are delighted to congratulate the students at the Wisdom School and the runner up at Royton and Crompton School on their impressive anti-littering campaigns. At Wrigley we take the issue of tackling littered gum very seriously and have been working to encourage long term behaviour change through initiatives like Bin It! over many years, most recently by adding a raft of new online resources for teachers and pupils to www.chewitbinit.com.”