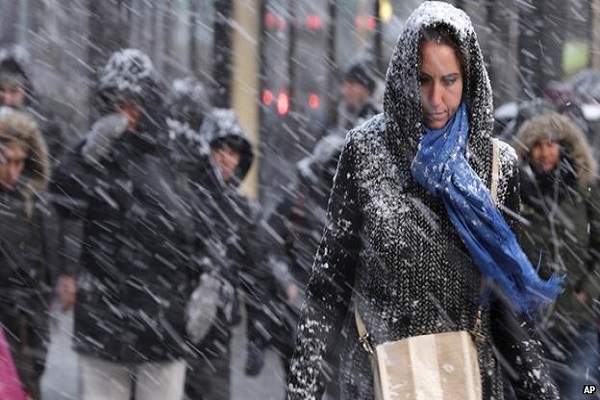 New York City and other areas in the north-east US have shut down, with forecasters warning residents to expect "crippling" amounts of snow.

Forecasters say Winter Storm Juno could dump up to 76cm (30ins) in some parts of New Jersey, Maine and New Hampshire.

All non-emergency vehicles were banned in New York City from 23:00 on Monday (04:00 GMT Tuesday) and subway services were suspended. Similar measures were in place in Boston, Massachusetts.

Some 60 million people may be affected.

An emergency has been declared in the states of New York, New Jersey, Connecticut, Rhode Island, Massachusetts and New Hampshire.

Boston, which is forecast to receive some of the highest snowfalls, has also suspended public transport and car travel.

However, some meteorologists in Pennsylvania and New Jersey have downgraded their snowfall predictions, saying there has been less snowfall than initially forecast.