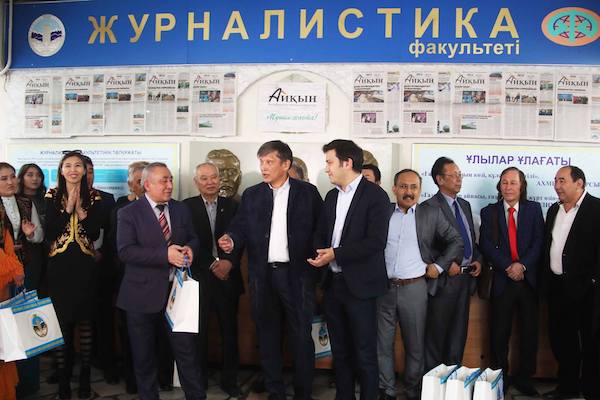 At the end of last week, April 7, 2017, representatives of the media, international organizations and the scientific community gathered for the II International Conference organized by the Faculty of Journalism of KazNU named after al-Farabi. The theme of the meeting was "Models of teaching international journalism for sustainable development". In the framework of the IV International Farabi Readings held annually by the KazNU, with the support of the UNESCO Cluster Office in Almaty, the OSCE, the Adil Soz Freedom of Speech Freedom Foundation, the Turkic Journalists Foundation, the International MediaNet Journalism Center and the Minber Journalists Support Center, scientists And journalists discussed the current state and prospects for the development of world and national journalism.Today, the forms and content of information transfer have changed in a constructive manner. The second decade of the 21st century was marked by the globalization of communication, new technological challenges and the digital transformation of the media sphere.

Young people read less, go online. A new reality is being created. Each of us has a virtual twin in the social network. The conference participants noted that before our eyes the fourth stage of the technological revolution is taking place, the merging of online and offline spheres, the emergence of the cyber-physical world. There comes an era of universal connectivity to the Internet, sensory devices are rapidly spreading. Every minute in the new Internet world is millions of emails, WhatsApp messages, video views and search queries.

All this affects the process of education. "It is necessary to accumulate the efforts of scientists and practitioners of journalism, to create a sensible symbiosis of world experience and domestic methods for determining a new model of journalistic education in Kazakhstan, taking into account the need to introduce interdisciplinary approaches, game forms, digital innovations in education." The journalist dean, Sagatbek Medeubek said.

In this regard, the head of the chair of UNESCO, international journalism and media in the society of al-Farabi Kazakh National University, doctor of philological sciences, professor Shyngysova N.T. Expressed hope for the participation of all interested parties in improving journalistic education: "Our university is doing a lot to update the curricula, they have been fully modernized in accordance with the educational programs of TOP-100 universities in the world. The STEM-education, the competence approach on the basis of the modular principle of training, interdisciplinary and problem-oriented training were implemented. More than 90% of the university's programs are accredited by international agencies, more than 50 double degree programs are being implemented with leading foreign universities.

Zhumabek Kenzhalin, the Honored Worker of Culture of the Republic of Kazakhstan, General Director of "Kazak Gazeterteri" LLP, noted the importance of training high-quality professionals for journalism in Kazakhstan. He expressed hope for the preservation of the dignity of the domestic education sphere, with the permanent presence of a spiritual moral foundation in the work of media workers. Back in the last century, the Kazakh publications "Haykap", "Kazak", "Dalai Ualyayatiny Gazeta" discussed issues of international relations, interaction of cultures, fulfilling an important mission - educating the population. And today we need to actively use as bases of practices, laboratory exercises - the editorial offices of the well-known magazines "Akikat" and "Mysl". It is necessary to strengthen the interest of existing journalists in the upbringing of the younger generation.

Specialist of the Communication and Information Program of the UNESCO Cluster Office in Almaty Sergey Karpov drew attention to the relationship between journalism, education and sustainable development of the state: "Kazakhstan adopted the strategic program 2050, Nurlyjol and 5 institutional reforms, which was directly implemented in the UN action program in the Republic of Kazakhstan" Partnership For Development (PFD) until 2020. KazNU took the lead in academic influence, becoming a UNAI-hub in the field of sustainable development, and coordinates the work of 20 universities in Kazakhstan, and also promotes 3,500 universities around the world. Since 2010, the UNESCO Almaty Office has been introducing the model of the UNESCO curriculum for educational institutions and media training courses in the universities of the region. In this process, more than 30 higher educational institutions of non-governmental organizations specializing in the development of the human potential of the media are involved. The basic curriculum translated into Russian and Kazakh languages was originally aimed at development journalism and from the beginning of 2016 on communication for sustainable development.

The National Coordinator for Political and Media Affairs, OSCE Office in Astana, Maria Dubovitskaya agreed with her colleague, spoke about the role of the OSCE in supporting Kazakhstani journalists: "The OSCE Office in Astana actively supports dialogue platforms to discuss the most pressing issues on media development, Particular on the development of digital broadcasting, public media financing, media legislation. In particular, the Central Asian Forum on Internet Development, which will be held this year for the eighth time, we think has become one of the brands using the latest information and communication technologies in Central Asia. The office also supports trainings and seminars on improving the effectiveness of the press services of courts and law enforcement agencies and their interaction with the journalistic corps, on the prevention of hate speech on the Internet, the development of judicial and the date of journalism (data journalism). Maria also noted that "Bloggers expanded the traditional field of journalism through" civil reportage ", and" streaming "television (broadcast live media on the Internet in real-time mode) made us all direct observers of key events, which allowed us to form an opinion ourselves About what's happening.

A great interest of the conference participants was also caused by the speech of the President of the Fund of Turkic Speaking Journalists Nazi Zhoiergenkykzy, who noted the need for coordinated actions in the sphere of education, the role of Kazakh journalism in the development of the domestic media sphere.

The Coordinator of the Soros Foundation's Media Program, Aliya Sharipbaeva, drew attention to the need to strengthen professional standards and legal literacy of journalists in Kazakhstan. Presenting the program "Media Project", Aliya spoke about the need to form new competencies and skills for students of journalism faculties. Today they must be able to create high-quality audio, video content for various multimedia platforms; Prepare interactive graphics, Web design, HTML and CSS; Deliver multimedia content via mobile devices; Orient in media business and much more.

Adil Jalilov, Director of the International MediaNet Journalism Center, also drew attention to the radical change in the specifics of training journalists. "We live in an era of total information noise. It is also called the era of post-truth. In the information environment, the dominance of fakes, falsification of data, manipulation of statistical data, etc. And the second moment, we are in a world of illusions, we produce newspapers and magazines that our children will not read. It is necessary to think how to be constantly relevant. We know a domestic blogger who has more than 11 million subscribers. This coverage can not boast of any television channel in Kazakhstan. Not to mention the newspapers. We must understand that bloggers today are forming the consciousness of our youth, which will rule the country tomorrow. I want, in this regard, to call on all of us, uniting, to make interesting and relevant training programs for our children, so that it is interesting and relevant.

The need to protect journalists and help them in difficult moments of investigations or conflicts with various structures was said by the expert of the International Foundation for the Protection of Freedom of Speech "Adil Soz" Galiya Azhenova. "Our fund spends a lot of effort on training journalists, increasing their legal literacy. We must understand that a strict attitude towards journalists is not a guarantee of success. Cruelty of punishment does not make people more moral. It hardens them. "The expert also noted the importance of work on the draft law on the media. Expressed alarm by some amendments, which greatly hamper the work of journalists. For example, "the requirement to provide a response to a claim or a refutation within three days. With such an approach, there is not even time to study the situation. There are also difficulties in determining the limitation period for cases of protection of honor and dignity. These cases by law do not have a statute of limitations. 25 years have passed, already there is no newspaper, the name is different, the country is different. A man suddenly decided to sue, punish the journalist. And the law allows such things".

Teachers of universities shared their vision of problems, their own experience and methods: Gulnar Asanbayeva, Bagil Akhatova (KazUMLO), Saltanat Kazhimuratova (KIMEP). The scientists noted the need to change teaching methods, the retirement into the history of a number of professions, the actualization of game forms of instruction.

The meeting turned out to be interesting, useful and did not meet the planned time frame. Many questions provoked a heated discussion. Something else remains to be rethought, to understand the vectors of innovation, to see hope for a revival of the basic journalistic values. Today both journalists and journalists do not understand that a lot of problems have accumulated in the shop of media workers, which must be solved. The sphere of education can not develop independently from practice. We need a strong alliance and active cooperation between the university and practical journalism.