What do journalists expect from the new Turkish government 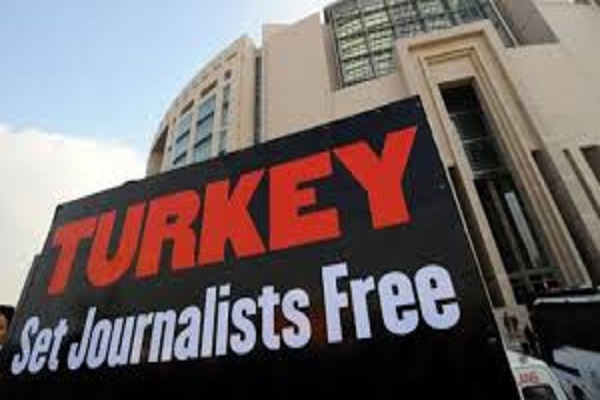 This International event, supported by the European Commission, will be an important opportunity to support journalists in Turkey (including jailed journalists), strengthen the position of the journalists' trade union and invite national and international NGO's to share their experiences on how to improve press freedom, freedom of expression on social media and protect workers' rights in the media industry. Crucially, the timing of the conference will enable participants to set out a new campaign strategy for media reform for the new political climate following the June parliamentary elections. See the draft programme and contact us for registration.

What do journalists expect from the new Turkish government ?

The Freedom for Journalists Platform (Gazetecilere Özgürlük Platformu - GÖP), including the TGS, organised a press conference on June 29 to express their expectations for the upcoming government. After the general election of June 2015 which saw the first hung parliament since 1999 and four major parties (AKP, CHP, MHP, HDP) currently in coalition talks, many journalists are demanding that the profession, taken hostage over the recent years, must be set free. Among other demands, Platform members are asking the new government to :

• amend the law to end the pre-trial jailing of journalists

• abolish the anti-terror laws that restrict freedom of expression

• end all press trials and release all journalists

Founded in 1952, the Journalists Union of Turkey (TGS) has celebrated its 64th anniversary on July 10 by renewing its call to journalists and media workers in the print and publishing industries to unite. TGS statted, "to achieve tangible improvements of the workers' economic and social rights, we call on all workers to join our trade union movement and to fight together under the same roof". TGS leaders also referred to the ongoing struggle to set free 20 journalists and media workers still in jail and complained about the daily judicial attacks against tehri colleagues. "Almost every day, journalists in Turkey are called to stand in front of a tribunal for their reporting. This trend should end immediately," said TGS.