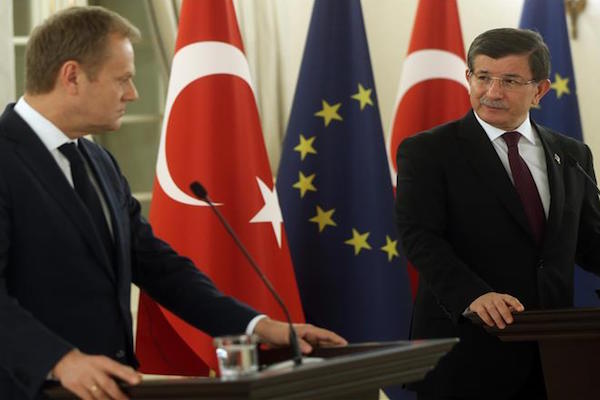 ANKARA (AVRUPA TIMES)-European Council President Donald Tusk on Tuesday emphasized his solidarity with Turkey in the aftermath of the Ankara bomb attack that killed 37 people.

“We cannot accept terrorism as the new normal,” he said during a visit to the Turkish capital.

Speaking at a news conference with Prime Minister Ahmet Davutoglu, Tusk expressed his condolences to the victims and families affected by “yet another appalling terrorist attack here in Ankara”.

Over the last five months, Ankara has been struck three times by terrorist bomb attacks that have claimed 169 lives.

“No matter how many times it has happened, we will never get used to it and we will always fight it,” Tusk said. “Let me reiterate this pledge and stress that we stand together in the fight against terrorism, yesterday, today and tomorrow.”

Tusk is in Ankara ahead of a second EU-Turkey summit later this week that will focus on migration as Europe seeks to seal an agreement that will stem the flow of refugees from Turkey to Greece. More than 850,000 crossed the Aegean Sea to Greece last year, according to the International Organization for Migration, and more than 143,000 have followed them so far this year.

Last week Turkey and the EU agreed in principle to a deal that would see “irregular migrants” returned to Turkey. In addition, for every Syrian refugee sent back, the EU would accept a Syrian from Turkish refugee camps in a bid to halt the people smuggling that has seen more than 350 drown in the Aegean since January.

Turkey has also demanded 6 billion euros ($6.66 billion) to help it care for refugees, increased progress on its EU bid and visa-free travel for Turkish nationals in the EU.

Tusk said the summit would “put together the elements needed to make this proposal legally sound, in line with EU and international law, practically implementable and, of course, acceptable to all 28 EU member states as well as to Turkey.”

However, much work remained, he told reporters. “Today we established a catalogue of issues that we need to address together if we are to reach an agreement by Friday.”

Davutoglu said the essence of Turkey's proposal was the “human dimension”.

He said: “Turkey suggested a proposal, within its moral responsibility, to make more people not die in the Aegean Sea and to decrease illegal crossings and to finish them completely, if possible.”

The premier added: “We have never negotiated about money. We have never regarded this issue as a financial matter. This issue is a humanitarian issue.”