'US arming PYD/YPG source of concern for Turkey' 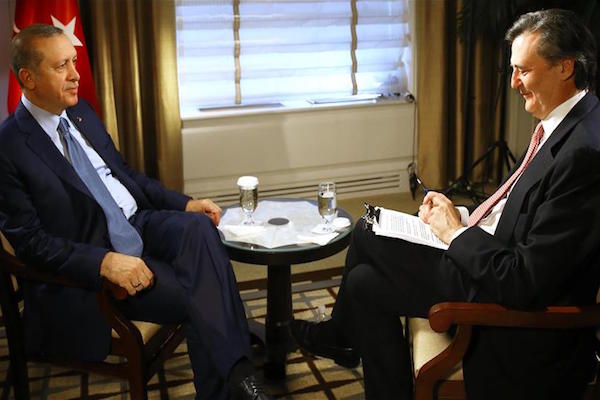 ANKARA (AVRUPA TIMES)-The United States arming the PYD/YPG is a source of concern for Turkey as these terrorist organizations pose a threat to Turkey, President Recep Tayyip Erdogan said Thursday.

“It is a source of concern,” Erdogan told Bloomberg in New York in an interview, speaking about U.S. cooperation with those terrorist groups.

“Three days ago, America landed two planes loaded with weapons. Where? In Kobani. For whom? For the PYD and YPG,” Erdogan said, referring to a Syrian city within sight of Turkey’s southern border.

“A very serious mistake is being committed before the world’s eyes,” he added.

Erdogan went on to slam the rationalization that the PYD and YPG are being armed since they are fighting Daesh.

“Now, Al-Nusra is a terror organization. Al-Nusra in the same way is fighting Daesh. If those who fight Daesh are not terrorists then Al-Nusra too, is not terrorist.”

Erdogan said that PYD and YPG are affiliates of the PKK terrorist organization that is fighting Turkey. “They are together. They are the same,” he said.

Erdogan called once more for the international anti-Daesh coalition – made up of 65 countries – to “bring down Daesh” without the help of terrorist groups. “Don’t worry about that. We can do that together,” he said.

Erdogan said that trying to distinguish between “good” and “bad” terrorist groups constitutes “wrongdoing against Turkey”.

“Because right now we are worried by the organizations you defend. These pose a threat to our country,” Erdogan said, adding that those who give weapons to the PYD/YPG terrorist groups are strengthening future threats to Turkey.

On a possible safe zone in northern Syria, Erdogan said that world leaders such as U.S. President Barack Obama, German Chancellor Angela Merkel, French President Francois Hollande, and even Russian President Vladimir Putin had previously agreed to the proposal. “But once we say let’s move forward on this, unfortunately this step was somehow not taken,” he added.

Erdogan said they want infrastructure and residences to be built in the proposed safe zone so Syrians need not leave their country to flee the war.

“We wish there won’t be any mistake,” he said.

“It is useful to give it a little time. But you know, no country can have plans without alternatives … It is not possible for a country like Turkey to have no alternatives,” Erdogan said, without going into specifics.

Asked whether he believes any part of the U.S. government – including the CIA or State Department – played a role in the coup attempt or knew about it beforehand, Erdogan replied: “It does not interest me whether they knew or not before the coup, what is important is the period after the coup.”

“My people are asking this. If we held a referendum and asked: Who is behind this coup? The answer the Turkish people would give is FETO [the Fetullah Terrorist Organization]. Ok.

“Where is FETO? In America.

“How many years has he been there? He has been there for 17 years.”

Erdogan said that although Ankara has sent the U.S. 85 boxes of files showing that Gulen and his followers are responsible for the coup, “this man is here, is in Pennsylvania,” a state adjoining New York.

Asked whether he believes that is the behavior of an ally, Erdogan replied: “This is what is saddens us.”

“All the documents, for example testimonies, have been given,” Erdogan said, adding that Chief of General Staff Hulusi Akar’s aide – coup-plotter Lt. Col. Levent Türkkan – has admitted that “Pennsylvania is behind this,” and that the night of the foiled coup, Akar’s kidnappers even tried to connect him with Gulen by phone.

“All this is in the records, so what are we going to prove?” Erdogan asked.

“We are strategic partners, we are together in NATO, we want him, give [him], and let us try [him]. Let’s do what is needed.