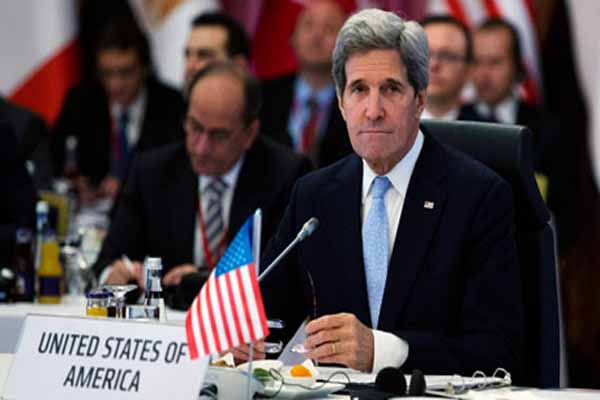 U.S. Secretary of State John Kerry said on Sunday that the United States would double its non-lethal aid to opposition forces in Syria to $250 million and that foreign backers had agreed to channel all future assistance through the rebels' Supreme Military Council. Kerry stopped short of a U.S. pledge to supply weapons to insurgents fighting to overthrow Syrian President Bashar al-Assad that the rebels have sought. But he said that the rebels' foreign backers were committed to continuing support to them and "there would have to be further announcements about the kind of support that that might be in the days ahead" if Syrian government forces failed to pursue a peaceful solution to the crisis. Speaking after a meeting of the Syrian opposition and its 11 main foreign supporters in Istanbul, Kerry said the United States would provide an additional $123 million in non-lethal assistance to the rebels, bringing the total of this kind of U.S. help to $250 million. Kerry urged other foreign backers to make similar pledges of assistance with the goal of reaching $1 billion in total international support. A U.S. official said on Friday that new non-lethal U.S. aid could include for the first time battlefield support equipment such as body armor and night-vision goggles. U.S. officials have said in the past that the equipment could include armored vehicles and advanced communications equipment, but Kerry gave no specifics.

He said the United States would work with the Syrian opposition to determine how the money would be spent and added that Washington would also provide nearly $25 million in additional food aid.

Kerry said the foreign supporters had "all committed that the aid and assistance from every country will go through the (rebel) Supreme Military Command."

"Today, it's safe to say that we are really at a critical moment," Kerry said. "The stakes in Syria couldn't be more clear: Chemical weapons, the slaughter of people by ballistic missiles and other weapons of huge destruction. The potential of a whole country, a beautiful country with great people, being torn apart and perhaps breaking up into enclaves (with the) potential of sectarian violence which this region knows there is too much of.

"What we are trying to do is to avoid all of that. And we committed to - we recommitted - because we think there are some people who don't believe that we believe it, or are in fact are committed to it," he said.

Kerry referred to a statement issued after the meeting by Syria's main opposition National Coalition in which it pledged not to use chemical weapons, rejected "all forms of terrorism" and vowed that weapons it attains would not fall into the wrong hands.

In its declaration outlining its vision of a post-Assad Syria and issued following the "Friends of Syria" meeting with Western and Arab backers, the coalition also said it would not allow acts of revenge against any group in Syria..