The delay is due to the technical difficulties, but also because of logistical challenges coupled with inclement weather, 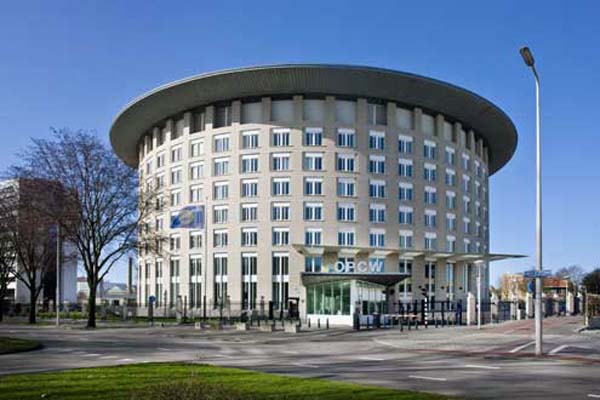 Previously anticipated removal of the first tranche of chemical agents from the territory of Syria “is likely” not to go as scheduled – by December 31st – and, will be with “limited delay,” the special coordinator of the Organization for the Prohibition of Chemical Weapons (OPCW) Sigrid Kaag announced on Saturday. While no projection was made as to when this first stage of operation would be complete, the joint UN-OPCW mission coordinator Kaag is due to report to the UN Security Council (UNSC) on the issue on January 8, 2014, the UN said. The delay is due to the technical difficulties, but also because of logistical challenges coupled with inclement weather, a written UN statement said. Mission also noted the Syrian side has also indicated its “specific requirements,” deemed as “critical to the package and transport” of chemical weapon material to be transported out of the country. At the same time, since, three months ago Syria disclosed its chemical weapons arsenal, “important progress has been made,” the mission noted. The UN Secretary General Ban Ki-moon also said that the international effort to eliminate Syrian chemical weapons continued to make effective progress.

Joint mission continues to work closely and intensively with the government in Damascus and the assisting states to begin “safe and secure removal and transportation operations as soon as possible,” Ban said on Saturday in a different UN statement disseminated to the UN press.

Preparations are “well advanced,” the UN said, when it comes to the supply of materials and transport equipment, as well as the provision for the maritime transport and destruction capabilities. A number of member states have contributed positively to the Syrian requests for assistance on this.

The OPCW-UN joint mission has also confirmed that the Syrian government had completed the destruction of all unfilled chemical munitions well ahead of the timeline set by the OPCW Executive Council.

UN Security Council and OPCW Executive Council established timelines for the removal and elimination of Syrian chemical weapons that will conclude as planned by June 31, 2014.

In spite of the volatile situation in Syria, the OPCW-UN mission calls upon all parties to ensure the timely removal and continued destruction of chemical weapons as declared by Damascus and verified by international community.

In addition, the OPCW-UN joint mission advised of the “importance of maintaining positive momentum.”

It is ultimately first and foremost the responsibility of Syria to intensify its efforts and ensure its international obligations and commitment are met, the UN statement reads.