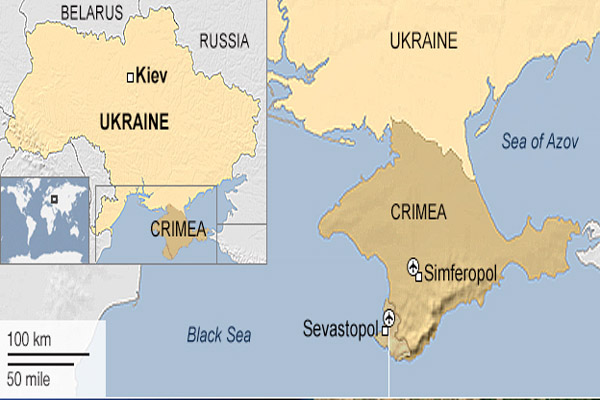 Arsen Avakov called their presence an "armed invasion". But Russia's Black Sea Fleet has denied that Russian servicemen are taking part. The other main Crimean airport, Simferopol, has also been occupied by armed men, thought to be pro-Russia militia. There are also signs of further military movements: The BBC has seen eight truck with the black plates of the Russian army - usually the type used to carry personnel - moving towards Simferopol There are unconfirmed Ukrainian reports of eight Russian military helicopters arriving in Sevastopol The Ukrainian parliament has called on the United Nations Security Council to discuss the unfolding crisis in Crimea. As Ukraine's currency slides, the central bank has put a 15,000 hryvnia (1,000 euro; £820) limit on daily bank cash withdrawals.

He was reported to have been admitted to hospital with a heart attack on Thursday.

Mr Ilyin was appointed earlier this month by Viktor Yanukovych, in one of his last acts before being ousted from the Ukraine presidency.

Relations between Russia and Ukraine have been strained since Mr Yanukovych lost power.

These tensions have been particularly evident in Crimea, Ukraine's only Russian-majority region.

The BBC's Bridget Kendall in Moscow says the Crimea is becoming the lynchpin of a struggle between Ukraine's new leaders and those loyal to Russia.

Mr Yanukovych is now in Russia and is preparing to hold a news conference on Friday in the city of Rostov-on-Don, near the Ukrainian border.

He surfaced in Russia on Thursday, asserting that he is still Ukraine's lawful president.

Ukraine's general prosecutor has said that Ukraine will ask Russia to extradite Mr Yanukovych, if it is confirmed that he is there.