UK was treated to a rare glimpse of the Northern Lights after the natural display lit up skies across the country. 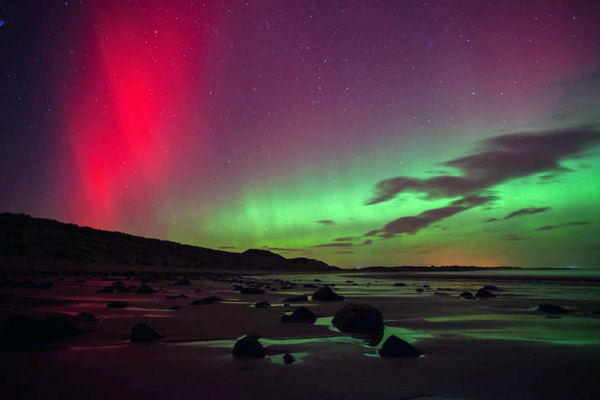 The unique Aurora Borealis formation, which consisted of spectacular red and green lights, was visible as far south as Gloucestershire, Essex and Norfolk last night. But those in Scotland and northern England got the clearest view, with many taking to Twitter to share their experiences. Richard Wilson, from Guildford, Surrey, who saw it from the air, added: ‘Great view of the Northern Lights from 30,000 feet over Scotland tonight. Awesome sight!,’ Another glimpse of the lights in Whitley Bay (Picture: PA) The Light formations are usually only visible in the more northern parts of the UK so Alex Green, who works for the National Trust in Norfolk, was surprised when he saw them further south. ‘Wow, a life tick! NorthernLights over the north Norfolk Coast and visible with the naked eye! Just amazing!,’ he said.