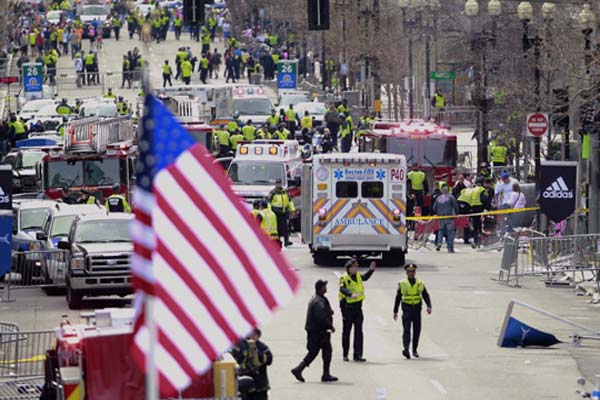 Pictures from the scene showed blood stains on the ground and several people knocked down.

Massachusetts General Hospital was treating victims of the explosion in its emergency room but information about their condition was not immediately available, a spokeswoman said.

Police reported at least one explosion and witnesses said there were two, which hit as spectators were cheering on people finishing the Boston Marathon, which was first run in 1897. Reporters in the media center heard two blasts.

A White House official said Obama was told about the "active investigation and response to the incident in Boston" as well as the ongoing coordination with state and local officials.

Scores of people, some bloody, wandered the streets around the finish line, though their numbers were thinning as police, some carrying heavy weaponry, tried to clear the area and a pungent smell hung in the air.

Mike Mitchell of Vancouver, Canada, a runner who had finished the race, said he was looking back at the finish line and saw a "massive explosion."

"Everybody freaked out," Mitchell said.

Ambulances, fire trucks and dozens of police vehicles converged at the finish line.

U.S. President Barack Obama was notified and directed his administration to provide whatever assistance was necessary, the White House said.

"Blood everywhere, victims carried out on stretchers. I saw someone lose their leg, people are crying," the Boston Globe's Steve Silva reported from the citing, the Globe said on Twitter.

Hundreds of thousands of spectators typically line the 26.2 mile (42.19 km) race course, with the heaviest crowds near the finish line. The blasts occurred more than five hours after the start of the race, at a time when most top athletes were off the course but slower amateur marathoners were still running.

The transit agency shut down all service to the area, citing police activity.

Ambulances arrived on the scene within minutes and runners and spectators could be seen crying and consoling each other.

The Boston Marathon has been held on Patriots Day, the third Monday of April, since 1897. The event, which starts in Hopkinton, Massachusetts and ends Boston's Copley Square, attracts an estimated half-million spectators and some 20,000 participants every year.

The New York Police Department stepped up security around landmarks in Manhattan, including near prominent hotels, in response reports out of Boston, said Paul Browne, deputy commissioner of the NYPD.

Police have found "multiple explosive devices" in Boston, where two explosions struck near the finish line of the city's annual marathon on Monday, NBC News reported, citing officials, according to AFP.

The Boston Marathon said on its Facebook page that the two explosions -- which killed at least two people and wounded 23 others -- were caused by bombs, but did not give a source for the information.

The Secret Service says it has expanded its security perimeter at the White House following the explosions at the Boston Marathon, The Associated Press has reported.

Secret Service spokesman Ed Donovan says the measure was taken "out of an abundance of caution." He says it is not unusual to expand or contract the security perimeters.

Shortly after the explosions Monday, Secret Service shut down Pennsylvania Avenue outside the White House, cordoning off the area with yellow police tape. Several Secret Service patrol cars also blocked off the entry points to the road.

The White House was not on lockdown and tourists and other onlookers were still able to be in the park across the street from the executive mansion.