Erdogan will address the Turkish-Belarus Business Forum later on Friday. 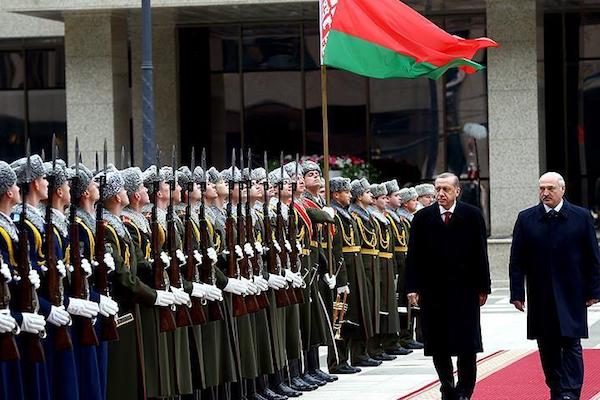 "There was a drop in the trade volume between 2013 and 2015. We can increase this to $1 billion in a very short time," Erdogan told reporters along with his Belarusian counterpart Alexander Lukashenko in Minsk.

"This is not difficult [to do] when you consider the two countries have a combined population of 90 million," he said.

Erdogan added that Turkish entrepreneurs had investments worth about $1.5 billion in Belarus.

"The steps that they [entrepreneurs] take together with the businessmen here [in Belarus] would be a win-win for both countries."

Lukashenko, for his part, expressed his pleasure over Erdogan's first visit to the capital Minsk.

"With your visit, I am sure we can take our relations to the next level," he said.

Turkey to keep taking in refugees

Following the bilateral meeting, Erdogan attended the opening ceremony of the Minsk Mosque where he said Turkey would continue to host refugees from Syria and Iraq.

"We have been hosting them [refugees] and we will continue to do so because it is what our faith requires us to do," the Turkish president said.

"We cannot close our doors to people who are fleeing from bombs," he added.

Turkey hosts the largest number of Syrian refugees in the world, and so far has spent more than $20-$25 billion on their care, according to Turkish Prime Minister Binali Yildirim.

Erdogan criticized some European countries over their "intolerance" and "impatience" against refugees.

"People are subjected to violence and discrimination because their [ethnic] identities, appearances and faiths are different," he said.

"I hope this place of worship [Minsk mosque] will be one of the symbols of Turkish-Belarusian friendship," he said.

Lukashenko said he hoped the opening of the mosque will play an "important" role in introducing the true values of Islam.

"This mosque is not only a home for Muslims in Belarus, but it is also a place of worship that will contribute to the development of Belarusian culture," he added.

Erdogan will address the Turkish-Belarus Business Forum later on Friday.