Baroness Meral Hussein-Ece OBE was awarded an Honorary Doctorate, Doctor of Letters (DLitt) from Coventry University, in recognition for her work for equality for ethnic minorities in the UK 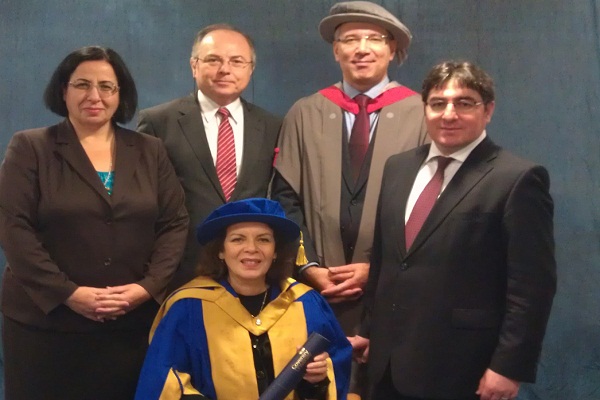 On the 23 November, Baroness Meral Hussein-Ece OBE was awarded an Honorary Doctorate, Doctor of Letters (DLitt) from Coventry University, in recognition for her work for equality for ethnic minorities in the UK, and for her contribution towards peace in Cyprus.

Accompanying her to the ceremony at Coventry were the Turkish Consular General, Ahmet Demirok, and the Turkish Cypriot UK Representative, Ms Oya Tuncali, and Mr Ihsan Tuncali.

Baroness Hussein-Ece said this is a huge honour and privilege, and hoped it would inspire other people to work postively towards peace, tolerance and reconciliation for people in our community and in wider society.

I would love to see more younger people, and women getting involved in public life, and for the Turkish and Turkish Cypriot communities to place a greater emphasis on educational achievement.

Other notable people to be awarded an Honorary Doctor of Letters, include J. K. Rowling, Gordon Brown MP, and Condaleeza Rice.