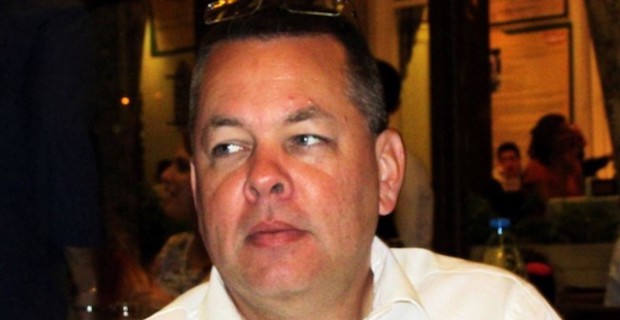 A Turkish court on Friday sentenced U.S. pastor Andrew Brunson to three years and 45 days in prison, but ordered him released from custody.

The Izmir Heavy Penal Court No.2 ruled Brunson's house arrest and travel ban should be ended, crediting the American pastor for time served and allowing him to walk free.

Brunson was arrested on Dec. 9, 2016 on charges of being member of Fetullah Terrorist Organization (FETO). On July 25, citing Brunson's health problems, an Izmir court ordered him moved from jail to house arrest.

Brunson's charges include spying for the PKK -- listed as a terrorist group by both the U.S. and Turkey -- and FETO, the group behind the defeated coup attempt in Turkey of July 2016.

Turkey and the U.S. have faced rocky relations following Washington’s imposition of sanctions over Brunson's detention.

Political tensions between the two countries sparked worries in the markets after U.S. President Donald Trump threatened to use economic pressure to secure Brunson's release.

Shortly after the release, U.S. President Donald Trump said on Twitter that his "thoughts and prayers" are with Brunson, adding he hopes "to have him safely back home soon!"

"PASTOR BRUNSON JUST RELEASED. WILL BE HOME SOON!" he said in a separate tweet.

Keywords:
BrunsonAndrew BrunsonPastor Andrew Brunson
Your comment has been forwarded to the administrator for approval.×
Warning! Will constitute a criminal offense, illegal, threatening, offensive, insulting and swearing, derogatory, defamatory, vulgar, pornographic, indecent, personality rights, damaging or similar nature in the nature of all kinds of financial content, legal, criminal and administrative responsibility for the content of the sender member / members are belong.
Related News