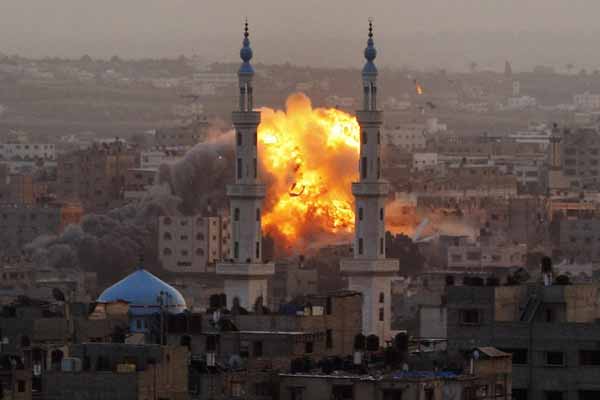 ANKARA Turkish Foreign Minister Ahmet Davutoglu has called on the United Nations to send observers to the Gaza Strip to monitor ceasefire violations, citing the mutual exchange of blame between Israel and Hamas.
"Both sides will of course blame each other when the ceasefire is broken. There should be UN observers in Gaza and they should make efforts to ensure a lasting ceasefire," Davutoglu told a press conference Friday with Iraqi Turkmen Front leader Arshad al-Salihi in the Turkish capital, Ankara. Earlier in the day, Israel declared the collapse of a 72-hour humanitarian ceasefire in the Gaza Strip, accusing Hamas operatives of killing two soldiers and capturing another. "It would not be right to put the blame on one side after an allegation levelled by the other," Davutoglu said. amas accused Israel of using reports about the abduction of the soldier to end the humanitarian ceasefire and cover up what it described as Israeli massacres in the Palestinian territory. "There is no justification for Israel to violate the truce as the officer was captured and the two soldiers were killed ahead of the truce," senior Hamas leader Mousa Abu Marzouk said Friday. UN Secretary-General Ban Ki-moon also blamed Hamas for violating the ceasefire in Gaza and demanded the unconditional release of the Israeli soldier thought to be captured by Hamas. The Palestinian death toll from the ongoing Israeli offensive in the Gaza Strip has reached 1,522 by Friday evening after at least 62 Palestinians were killed in Friday's Israeli shelling of southern Rafah city, according to a Health Ministry spokesman. According to Israeli figures, at least 63 troops have been killed in battles with Palestinian fighters and three civilians by rocket fire.