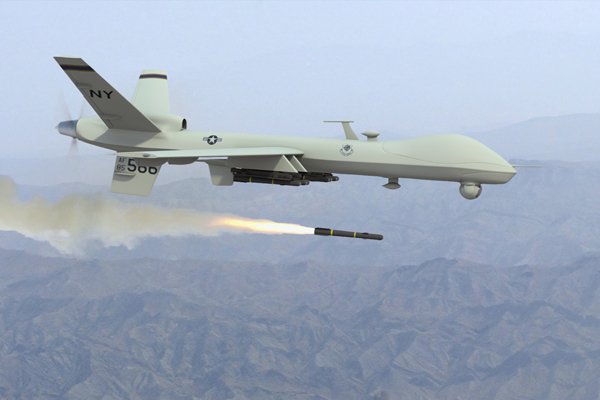 ANKARA (AVA) – The aircraft downed inside Turkish air space is a drone, Turkish Foreign Minister Feridun Sinirlioglu told a press conference in Ankara Friday.Sinirlioglu said that the intruding aircraft was shot down 3 kilometers (1.86 miles) inside Turkish territory, adding that the origins of the aircraft was still being determined.Earlier, the Turkish military announced that Turkish jets on Friday downed an unidentified aircraft near Syria border after it violated Turkish air space."The aircraft, whose nationality could not be established, was downed by patrolling Turkish jets in accordance with engagement rules after it failed to heed three warnings," the Turkish General Staff said in a statement issued on its website.Turkish Armed Forces is performing its duties determinedly within the framework of engagement rules, it added.

Meanwhile, spokesman for the Russian Defense Ministry, Igor Konashenkov, said that all Russian jets used in airstrikes in Syria returned to Hmeymim Air Base near Latakia after completing their missions Friday.

Russia began carrying out airstrikes in war-torn Syria on Sept. 30. According to the Kremlin, the strikes are aimed at supporting the Assad regime -- an ally of Russia’s -- against Daesh.

Turkey and the West, for their part, accuse Russia of targeting moderate groups in Syria opposed to Assad, many of which are supported by Ankara and Washington.

The downing of the yet to be identified aircraft Friday comes after Russia twice infiltrated Turkish air space on consecutive days earlier this month. On both occasions, Turkish F-16 jets intercepted the Russian fighters and forced a retreat.

The incidents drew worldwide criticism, with NATO Secretary-General Jens Stoltenberg calling it a violation that "does not look like an accident".

Turkey had formally protested against the incursions, which Moscow said was due to "bad weather conditions".

The Turkish Foreign Ministry had also made a demand for Russian officials to visit Turkey and brief Turkish officials about the recent violation over the Turkish-Syrian border.