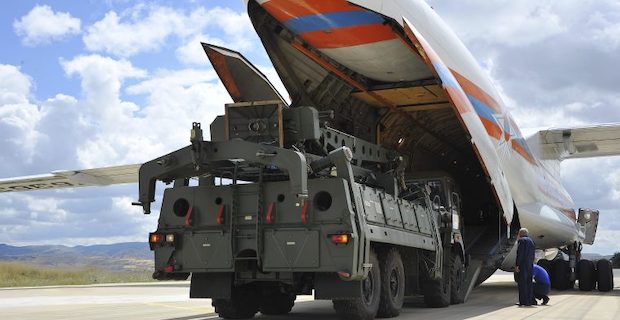 Turkey on Tuesday has continued to receive components of Russian S-400 missile defense system, as the 11th plane landed on an airbase in the capital Ankara, Turkey’s National Defense Ministry said. On Twitter, the ministry shared a photo of the Russian plane carrying the air defense hardware at the airfield on the outskirts of Ankara, and said: “The 11th plane landed on the Murted airfield.”

The delivery of components of the S-400 long range air defense system is ongoing, it added.

Turkey, however, emphasized the S-400 would not be integrated into NATO systems and would not pose a threat to the alliance. It has urged the formation of a commission to clarify any technical issues, but the U.S. has failed to respond to Turkey’s proposal.

Keywords:
Russian S-400
Your comment has been forwarded to the administrator for approval.×
Warning! Will constitute a criminal offense, illegal, threatening, offensive, insulting and swearing, derogatory, defamatory, vulgar, pornographic, indecent, personality rights, damaging or similar nature in the nature of all kinds of financial content, legal, criminal and administrative responsibility for the content of the sender member / members are belong.
Related News