Wall will be 'very, very good for Mexico', Trump says upon signing order at Department of Homeland Security 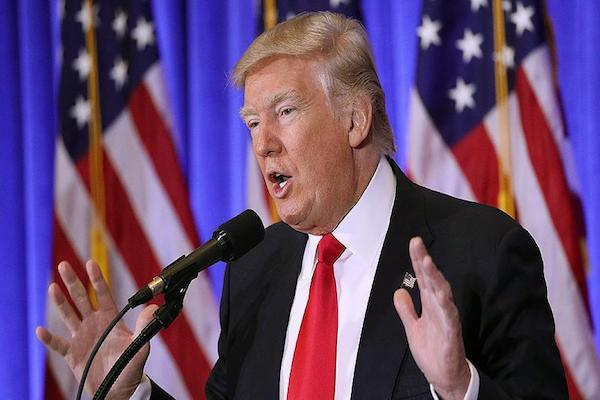 "For too long your offices and agents haven't been allowed to properly do their jobs," Trump said after signing the executive orders at the Department of Homeland Security. "That's all about to change."

The orders, he said, "will be very, very good for Mexico".

Trump pointed to what he said was the vast majority of migrants coming to the U.S. from Central America after transiting through Mexico.

Construction of the "border wall" will begin immediately, Trump said.

The American president repeatedly vowed during last year's campaign to build the wall, and said he would have Mexico pay for its construction.

The latter half of the promise will prove to be the greater obstacle. Mexican officials have consistently rejected the suggestion that they would foot the bill, and have not budged after Trump continued to repeat the mantra.

He has said that the American taxpayer will pay for the wall's upfront costs, but they will be paid back by Mexico.

Mexican President Enrique Pena Nieto is expected to meet with Trump next week.

The meeting will touch on "close coordination" between the countries, Trump said, including the war on drug cartels.

"We are going to save lives on both sides of the border," he said, adding that U.S.-Mexico relations will be greatly improved under his presidency.

Trump has long maintained that the physical structure would be a wall, and resisted suggestions that it could be a fence, but the White House told reporters earlier in the day it will be "a large physical barrier", leaving the door open to alternative structures.

Wednesday's executive order comes as Trump continues to blame without basis undocumented migrants for losing the popular vote. He has said that some 3 to 5 million people voted illegally in last year's polls, variously blaming undocumented migrants and other groups for his numerical loss.

What is beyond dispute is that he captured more than enough electoral college votes to secure the presidency.

As part of Trump's orders, 5,000 new border patrol officers will be hired, and the office of Immigration and Customs Enforcement will be tripled in size. The new hires appear to contradict a freeze on new federal employees Trump signed earlier this week.