To mark the third anniversary of Raif Badawi's arrest 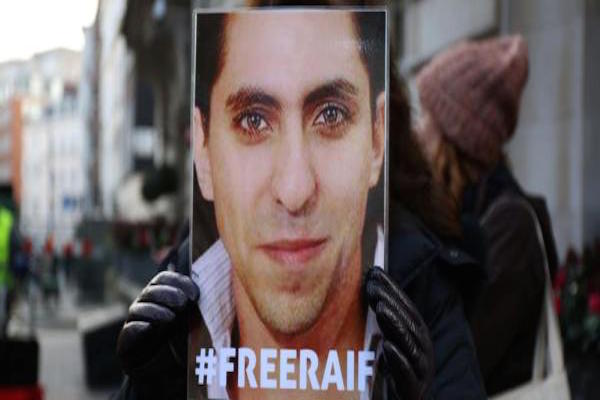 Day of Action for Raif Badawi. To mark the third anniversary of Raif Badawi’s arrest, campaigners in the UK will deliver an open letter to the Prime Minister and hold a public meeting with activists and MPs in parliament Activist and blogger Raif Badawi was first arrested on 17 June 2012. Three years later he remains in prison on charges that are politically motivated. To mark the third anniversary of his arrest activists are coming together to organise a Day of Action in London on 17 June 2015. Raif Badawi had already spent almost two years in prison before being convicted in May 2014 for ‘insulting Islam’ and founding a liberal website. He received a fine of 1 million riyals (£175,000) and a ten-year prison sentence. In addition, the court in Jeddah sentenced Badawi to 1,000 lashes.

On 9 January 2015, after morning prayers, Badawi was flogged 50 times. This punishment was due to continue every Friday until he had received a total of 1,000 lashes. However, subsequent floggings have not gone ahead, initially because Badawi was deemed not to have recovered sufficiently from the previous punishment. No explanation has been given for the postponement of further floggings. In June 2015, the Supreme Court announced its decision to uphold this draconian sentence.

Meanwhile, Badawi’s lawyer and brother-in-law Waleed Abulkhair is serving 15 years in prison for his peaceful activism.

To mark the third anniversary of his arrest, organisations and individuals actively campaigning for Raif Badawi and Waleed Abulkhair are holding a Day of Action.

Day of Action for Raif Badawi

The Day of Action will begin with a mass social media message (sent through Thunderclap) at 11am. Throughout the day, activists across the UK and the world will be encouraged to join the Day of Action on social media, by lobbying the Saudi authorities and sending messages of support to the families of Raif Badawi and Waleed Abulkhair. #freeraif #freewaleed

Organisations and individuals actively campaigning for Raif Badawi’s release will be holding a rally opposite Downing Street from 1.30pm. At 2pm, comedian Kate Smurthwaite and activist Peter Tatchell will join Jo Glanville (Director, English PEN), Maryam Namazie (One Law for All and International Front for Secularism), Pete Radcliff (Free Raif UK) and Melody Patry (Index on Censorship) to deliver a letter signed by hundreds of groups and individuals to the Prime Minister.